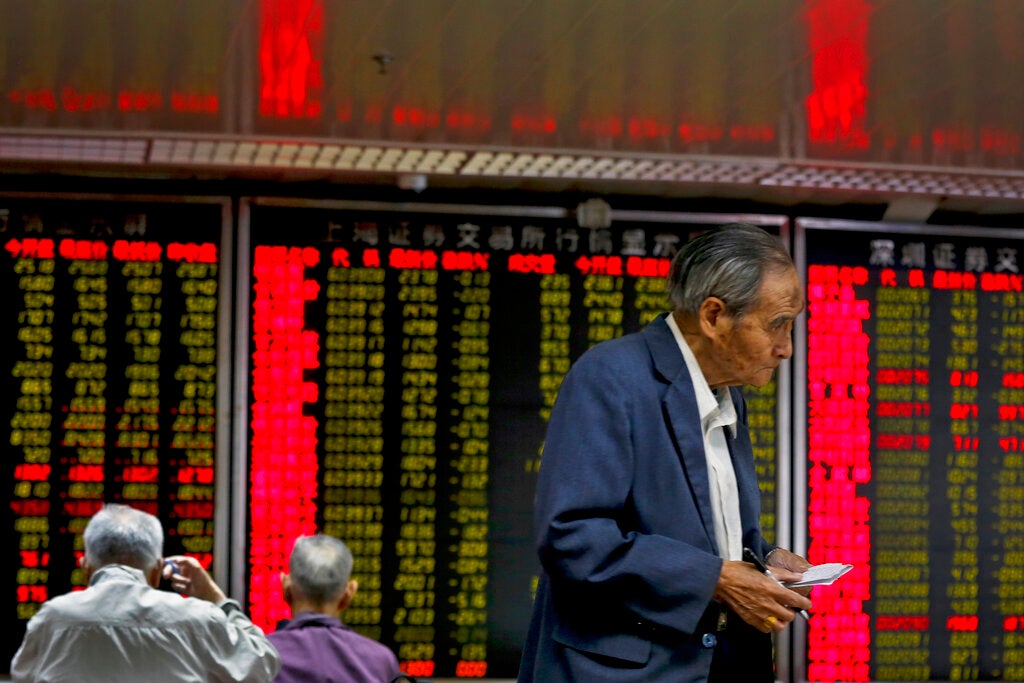 Chinese investors monitor stock prices at a brokerage house in Beijing, Monday, May 13, 2019. Shares were mostly lower in Asia on Monday after trade talks between the U.S. and China ended Friday without an agreement. (AP Photo/Andy Wong)

BANGKOK — Shares retreated in Asia on Monday after trade talks between the U.S. and China wrapped up Friday without an agreement.

China’s envoy to the trade talks, Vice Premier Liu He said before leaving Washington that Beijing would not compromise on matters of principle and that tariffs on Chinese exports to the U.S. should be lifted as a condition for striking a deal.

But Liu downplayed the level of tensions, saying China could cope with the challenges posed by the trade dispute.

President Donald Trump said on Twitter over the weekend that “We are right where we want to be with China.” He accused China of “ripping off” America.

The Trump administration said it was preparing to expand 25% tariffs to another $300 billion worth of Chinese goods, or practically all imports from China, after raising the import duty on $200 billion of imports from 10%, with effect Friday.

The tariffs war has been hammering Chinese manufacturers and is an added drag on growth for the region.

“The lack of resolution in the latest U.S.-China trade talks coupled with continued provocative tweets from President Trump provides no relief for risk sentiment as we look to another weak start to the week for Asia markets,” Jingyi Pan of IG said in a commentary.

On Friday, a late-day rally spurred by upbeat comments by U.S. officials pulled markets higher after an early slump triggered by the escalation in the trade war.

The higher tariffs from the U.S. and China’s response that it would take “necessary countermeasures” rattled investors Friday who had been hoping for a quick resolution to the dispute. Confidence in that outcome had eased investors’ concerns this year, along with a more patient Federal Reserve and solid economic data.

ENERGY: U.S. benchmark crude oil added 1 cent to $61.67 per barrel in electronic trading on the New York Mercantile Exchange. It lost 3 cents to $61.70 on Friday. Brent crude, the international standard, gained 24 cents to $70.86 per barrel.