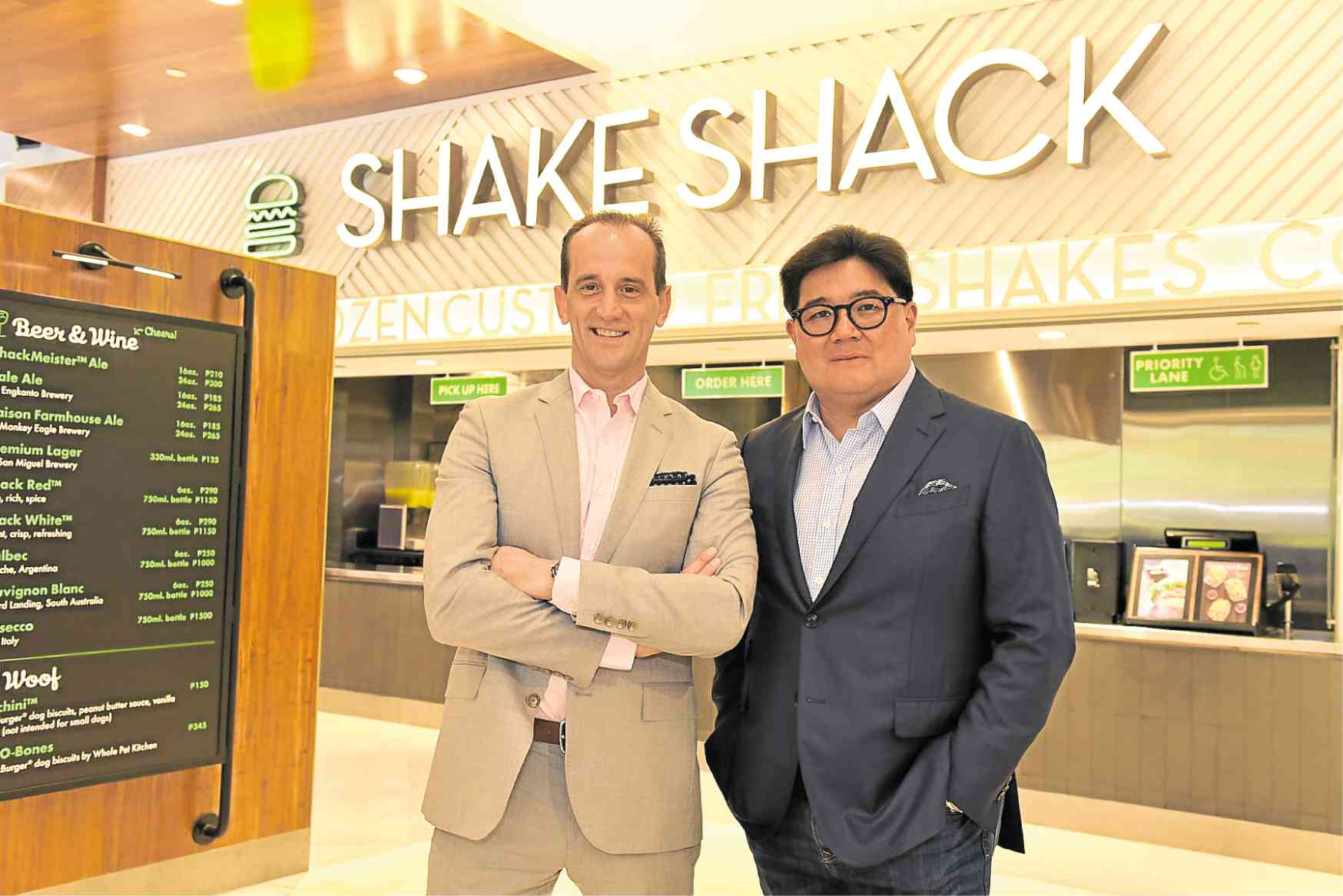 Shake Shack CEO Randy Garutti and SSI Group president Anton Huang opened the 300-squaremeter store at Central Square in
BGC, described as the “center of the universe as far as development is concerned.”

A friend once said: “Nothing is worth queuing for unless it’s for something free.”

But Filipinos could have already mastered the game of lining up—from snagging a tube of a starlet’s lipstick to endlessly waiting for space in the MRT.

And line up they did for another big import, Shake Shack. As early as 10:30 p.m. on Friday, a few fans already gathered in front of Central Square, BGC, waiting for the doors of the Philippines’ very first branch to open at 11 a.m. the next day. When it did, some still had to wait an average of three hours to get a piece of the famous East Coast specialty.

“In line with Shake Shack’s DNA to Stand for Something Good, our focus is to provide each Filipino customer with quality ingredients and make Shake Shack accessible to many. Our vision is to make each customer understand that they are part of the community, and not just riding on the hype,” SSI Group president Anton Huang said. SSI, through Specialty Food Retailers, Inc. (SFRI), acquired the licensing agreement for Shake Shack.

The branch here in the country is so far the last leg of the chain’s expansion in Asia, which already includes Japan, Hong Kong, Korea, China and just recently in Singapore.

It has been well received in other countries, but it was the enthusiasm of the Filipinos for the arrival of the restaurant, described as casual fine dining and not fast food, that resonated with the company.

In fact, it was Shake Shack’s first announcement it was coming to Manila that garnered the most likes on its Instagram page. It helped, too, that word spread thanks to OFWs and luckier Filipinos who have already visited the US, UK and Middle East branches as “part of their pilgrimage,” Huang said.

“It just tells you the connection that we’ve magically built with this community and that’s so exciting for us … it’s like a built-in incredible connection that’s amazing,” said Shake Shack CEO Randy Garutti during a press presentation at the BGC site.

It is the same kind of devotion that Huang’s team used to lure Shake Shack to the Philippines.

SFRI first reached out to Shake Shack in 2013, “but I think it took us six years of work and, at that time, we were not really ready to come to Manila, I don’t think we understood the market enough,” Garutti said.

He said Shake Shack was still a “smaller” company back then.

From a humble cart in 2004 peddling hotdogs in New York’s Madison Square Park, the burger joint that got its name from, of course—Grease (Olivia Newton-John and John Travolta was on a moving platform called “Shake Shack”, dancing and singing to “You’re The One That I Want”), today is a billion-dollar enterprise with a total of 225 branches so far.

“There’s a lot of work that has to go into building the international supply chain to make sure this burger tastes the same and I don’t think we were ready to do it here at that time. Now, I feel like we are ready [and] the Filipino economic growth, the people, seemed already ready for what we’re doing,” he added. 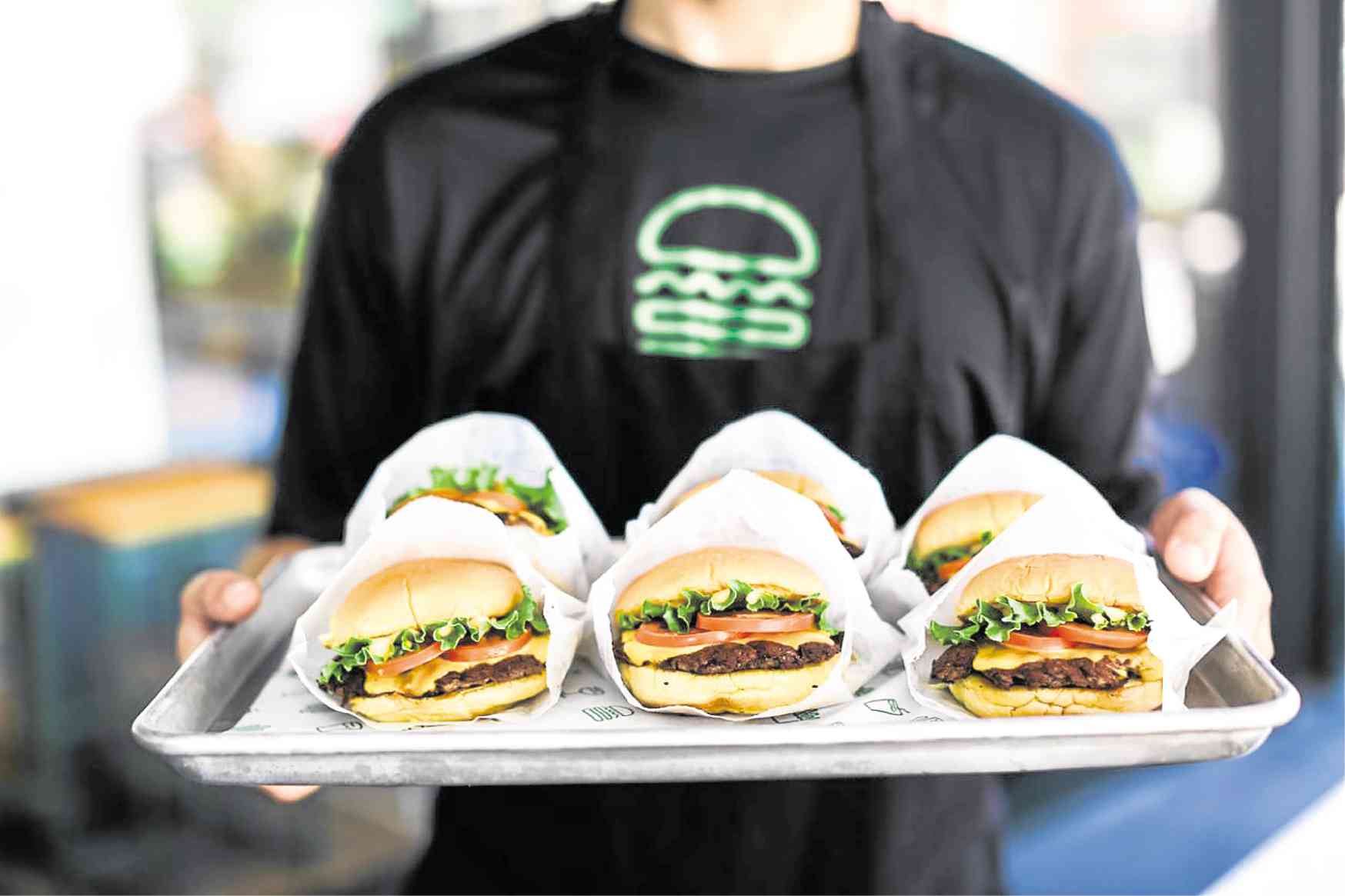 And Huang also knew the brand would be a nice touch to SSI’s growing portfolio.

“And as far as our business is concerned, SSI’s vision has always been to be a purveyor of lifestyle choices to the Filipino consumer,” said Huang, who did not disclose how much they spent for the deal.

Of the courtship, Garutti said Shake Shack saw in SSI a partner that shared the same belief of taking care of its people and its customers.

For now, the partnership will stick to just one branch, he said.

“[It’s] one burger at a time. If we do our job well starting [from the opening] and people love what we do, that will give us the opportunity we hope to expand, but today we’re focused on this team, the guests,” Garutti added. “The bigger we get, the smaller we have to act. That’s one of my philosophies. That means that, for us, the only Shake Shack in the world that matters right now is this one, right?”

To ensure that the hype does not die down, they made sure the menu here would be Filipino-budget friendly. In Hong Kong, the burger costs 21 percent more, and in Singapore, 19 percent.

“We want to be a Shack for everyone and so we priced the way we felt we needed to price,” Huang said.

That’s not to say that quality will be affected. Huang said he ate many burgers a day prior to the opening (he personally favors the Shack Stack consisting of a cheeseburger and a crisp-fried Portobello mushroom patty) and they “taste exactly like NY, the ingredients are the same, the way it was cooked is the same, the equipment is the same. Our team came from all over the world to train this team.”

He said Shake Shack would have a place in Filipino culture beyond Instagramming.

“We want as many people here, whether it’s an aspirational moment for you or it’s an everyday moment for you if you work here and you can afford it every day or for a special occasion, we want to meet everyone where they are,” Huang said.