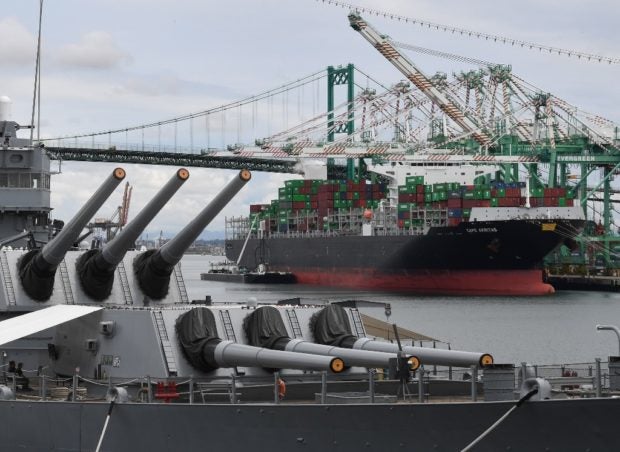 A container ship unloads its cargo beside the Battleship USS Iowa at the main port terminal in Long Beach, California on May 10, 2019. Two days of talks to resolve a worrisome US-China trade battle ended Friday, May 10, 2019, with no deal, but no breakdown either. AFP

WASHINGTON, United States – US President Donald Trump on Friday ordered a tariff hike on almost all remaining imports from China, less than 24 hours after Washington raised duties on approximately $200 billion of Chinese goods.

“The President also ordered us to begin the process of raising tariffs on essentially all remaining imports from China, which are valued at approximately $300 billion,” US Trade Representative Robert Lighthizer said in a statement.

Details on the process for public notice and comment will be posted on the USTR website Monday, ahead of a final decision on the new tariffs, Lighthizer said.

Just after midnight, Washington pulled the trigger on an increase in punitive duties on $200 billion in Chinese imports, raising them to 25 percent from 10 percent. Beijing responded vowing to take the “necessary countermeasures.”

Since last year, the United States and China have exchanged tariffs on more than $360 billion in two-way trade, gutting US agricultural exports to China and weighing on both countries’ manufacturing sectors.

The higher duty rates imposed on Friday will hit a vast array of Chinese-made electrical equipment, machinery, auto parts and furniture, and will apply to goods that left port after midnight Washington time (0400 GMT).

Lighthizer’s announcement came as US and Chinese representatives, including Vice Premier Liu He, held two days of trade talks in Washington.

Trump tweeted Friday that the talks, which he called “candid and constructive,” would continue. /cbb