TOKYO – Shares opened lower in Europe on Thursday, extending a retreat in Asia that deepened after China’s Commerce Ministry said Beijing would retaliate if the U.S. follows through with a plan to raise tariffs on Chinese imports. 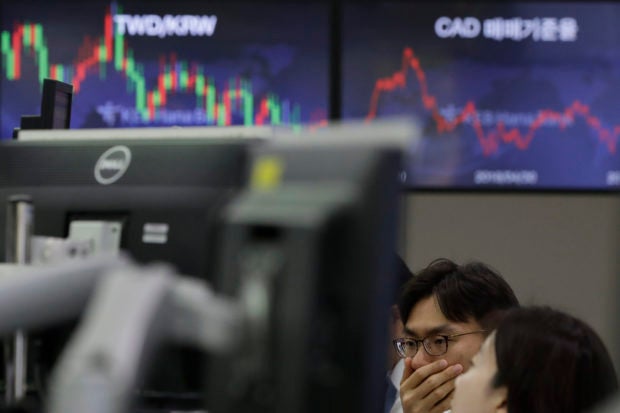 Currency traders watch the computer monitors near the screen showing the foreign exchange rate at the foreign exchange dealing room in Seoul, South Korea, Thursday, May 9, 2019. Asian shares were mostly lower Thursday amid investor jitters ahead of the latest round of trade talks between the U.S. and China. (AP Photo/Lee Jin-man)

Wall Street was set for a weak open with the future contract for the Dow Jones Industrial Average down 0.9% at 25,803.00.

The U.S. and China have raised tariffs on tens of billions of dollars of each other’s goods in their dispute over U.S. complaints about Beijing’s industrial and technology policies and a perennial U.S. deficit in trade with China.

Such moves would mark a sharp escalation in the yearlong trade dispute that has raised prices on goods for consumers and companies.

Negotiations between the U.S. and China were scheduled to continue in Washington on Thursday, and to include China’s top trade official.

The possibility that the dispute could escalate represents a marked shift from just a few weeks ago, when talks between the U.S. and China appeared to be on track for an agreement.

Hopes for a deal contributed to double-digit gains in all the major indexes so far this year.

But the latest tough talk is raising anxiety on Wall Street and casting doubts about a resolution.

“The pressure looks to continue amid the trade concerns found within the market with heightened volatility a new normal this week,” said Jingyi Pan, market strategist with IG in Singapore.

The U.S. government has filed plans to raise tariffs on $200 billion worth of Chinese imports from 10% to 25% Friday.

The Trump administration also has threatened to extend 25% tariffs to another $325 billion in Chinese imports, covering everything China ships to the United States.

Benchmark U.S. crude fell 73 cents to $61.39 a barrel in electronic trading on the New York Mercantile Exchange. It gained 72 cents to $62.12 per barrel on Wednesday. Brent crude, the international standard, lost 75 cents to $69.62.