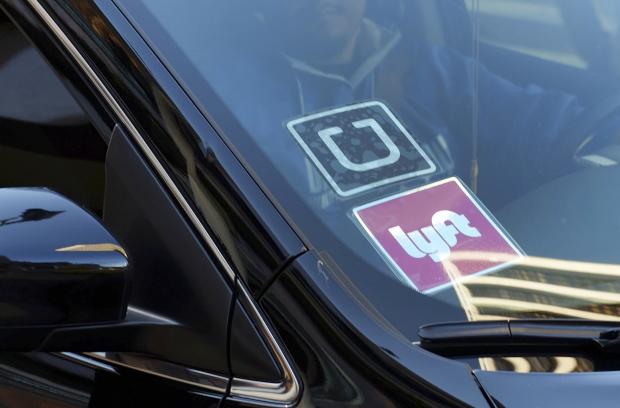 In this photo, taken Tuesday, Jan. 12, 2016, a driver displaying Lyft and Uber stickers on his front windshield drops off a customer in California. AP FILE PHOTO

WASHINGTON — The ride-hailing era ushered in by Uber and Lyft once promised to complement public transit, reduce car ownership and alleviate congestion.

But a new study on San Francisco has found the opposite may in fact be true: far from reducing traffic, the companies increased delays by 40 percent as commuters ditched buses or walking for mobile-app summoned rides.

Published Wednesday in Science Advances, the study went back to 2010, before the advent of so-called transportation network companies (TNCs), and compared journey times and road conditions with 2016, by which time they had become a common sighting.

San Francisco, where Lyft and Uber are headquartered, grew from 805,000 inhabitants to 876,000 during that period, as 150,000 jobs were added and the road network updated.

The authors, from the University of Kentucky and the San Francisco County Transportation Authority (SFCTA), accounted for these changes via a computer model that asked: what would things look like if ride-hailing companies had not come on the scene?

Greg Erhardt, an assistant professor of engineering at the university, told AFP his team had found “some substitution” from private cars to TNCs as well as a slight increase in carpooling.

“But the net effect is that two-thirds of TNCs are new cars added to the roadway, that would otherwise not be present,” he said.

They also found that weekday vehicle hours of delay — defined as the difference in travel time in congested versus free-flow conditions –- increased by 62 percent between 2010 and 2016.

By contrast, in the simulated model without ride-hailing companies, delays went up by only 22 percent — meaning that the TNCs were responsible for 40 percent of the increase.

The findings were challenged by Lyft, which said the study had failed to account for increased freight and commercial deliveries — an area in which Amazon and others have aggressively expanded in recent years, as well as tourism growth.

“Lyft is actively working with cities on solutions backed by years of economic and engineering research, such as comprehensive congestion pricing and proven infrastructure investment,” the company said in a statement noting its investments in shared rides and bikes.

Uber called for more widespread congestion charging, arguing that “while studies disagree on causes for congestion, almost everyone agrees on the solution.”

The study came as thousands of rideshare drivers in major US cities staged a series strikes against pay and working conditions. It also came ahead of Uber’s keenly anticipated Wall Street debut. Lyft went public in March.

Proponents of ridesharing often use the argument that the majority of journeys take place at non-peak times, such as when people have gone for a night out and are returning home from bars.

Among the cars’ most disruptive activities on traffic flow were curbside pickups and drop-offs, especially on major arterial roads, it found.

Another notable effect was so-called “deadheading,” which Erhardt explained as driving around in search of the next customer. “It doesn’t serve a purpose in terms of transporting a person. So that’s purely an addition to traffic.”

The study relied on background traffic speed from GPS data obtained from a commercial vendor, but when the researchers approached the companies to share their own trip data, they were denied access.

They were forced then to rely on a method of data scraping developed by Northeastern University that uses the companies’ public apps to learn about vehicle movements.

Elliot Martin, a research engineer at the University of California Berkeley’s Transportation Sustainability Research Center, who was not connected to the study, said its methodology was rigorous.

“I think that they did a good job of trying to draw comparisons, to look at what would have happened in a world where TNCs didn’t exist versus where they did exist,” he said, adding the methodology was the “best available” given the amount of information.

Despite the findings, ride-hailing isn’t all bad, said co-author Joe Castiglione of the SFCTA.

“They are providing services like helping people move around in the evening when transit isn’t great, or assisting the visually impaired,” he told AFP.

The trick, he said, was to determine “how (to) manage the positive benefits without the negative externalities” through new policies like congestion pricing or curbside regulation. Stephen Goldsmith, director of Data-Smart city solutions at Harvard, and the former mayor of Indianapolis, agreed.

“There’s no love lost today between most cities and Uber, but there’s a lot of customer loyalty, which makes it difficult for cities to cut back too much.”