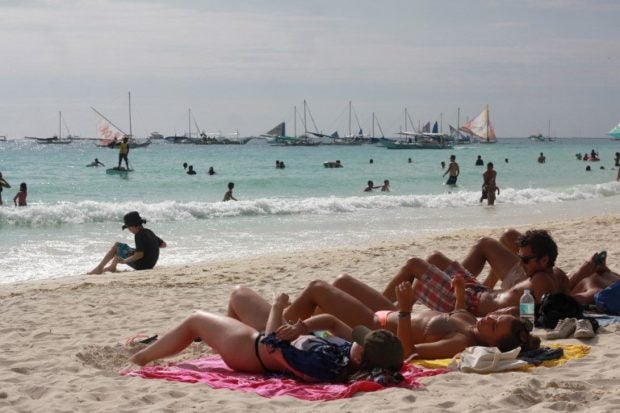 NADI, FIJI — Foreign tourist arrivals rose 7.6 percent in the first quarter to 2.2 million, such that Tourism Secretary Bernadette Romulo-Puyat sees the country hitting another record-high number of tourists from abroad for the entire year.

In the month of March alone, foreign arrivals increased 11.1 percent to 714,309 from 642,757 a year ago, Romulo-Puyat said, citing the latest Department of Tourism (DOT) figures.

Romulo-Puyat said having “a lot of direct flights” by carriers such as Philippine Airlines, Cebu Pacific and AirAsia helped boost tourist arrivals.

“In fact, when we met with these airlines, they told us that they have more new routes [to-and-fro] Japan and Australia,” the Tourism chief said.

So far this year, South Korea remained the top source of foreign tourists coming to the Philippines, followed by China, the United States, Japan and Australia, she said.

Romulo-Puyat said the first quarter figures showed that the country was “on track” to hit the DOT’s 8.2-million target for 2019.

“Last year, we were 7.1 million. We considered that an accomplishment—it was the first time we breached the 7-million mark,” she said.

The DOT’s target in 2018 was a higher 7.4 million, hence the actual arrivals, although the highest ever thus far, were below target.

But Romulo-Puyat noted that the country lost about 500,000 tourists during the six-month closure of top tourist destination Boracay last year, which coincided with the peak summer season.

Moving forward, Romulo-Puyat said Boracay was expected to attract even more tourists as it had become an example of how sustainable tourism can be actually done.

Also, Romulo-Puyat said the DOT wanted to attract more Japanese tourists, such that she will join President Duterte’s state visit to Japan later this month.

In the meantime, the DOT will bring the ambassadors to the Philippines of Japan, Singapore, Spain, France, and Italy to Boracay on Tuesday, May 7 to promote the rehabilitated tourist spot.

“They’re coming with me to Boracay. I want to show to them how safe it is. So far, our major tourist destinations have no security problem, so I just want to stress it to them,” she said.

After Boracay, the DOT plans to bring foreign ambassadors even to other “lesser-known” but “beautiful” destinations, Romulo-Puyat said. /je