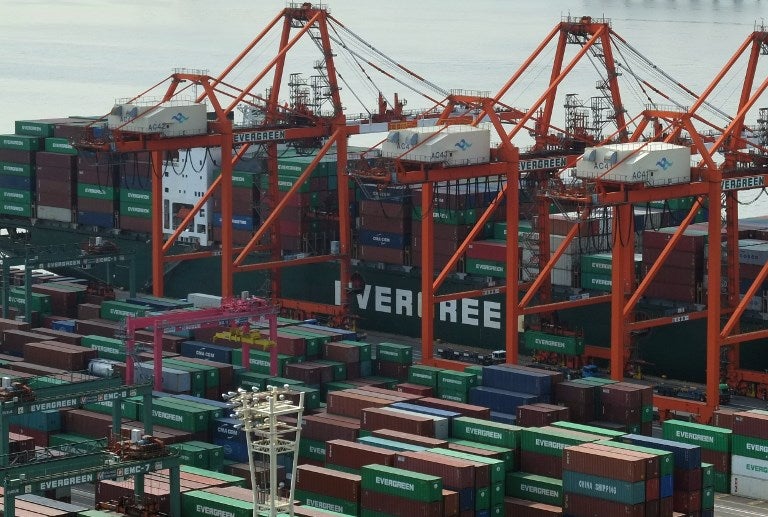 Containers sit piled on the docks as a ship sits docked at the international cargo terminal at Tokyo’s port on February 19, 2018. AFP FILE PHOTO / Kazuhiro NOGI

NADI, Fiji — The three East Asian economic giants together with Asean member-states on Thursday reiterated they will fight protectionism while strengthening intra-regional trade through targeted initiatives amid slowing global growth.

Following the 22nd Asean+3 Finance Ministers’ and Central Bank Governors’ Meeting held on the sidelines of the 52nd Annual Meeting of Asian Development Bank (ADB), Chinese Finance Minister Liu Kun told a press conference that Southeast Asian countries together with China, Japan, and South Korea will stick to multilateralism, oppose protectionism and boost trade and investment across the region amid external uncertainties.

China and Thailand co-chaired this round of the Asean+3 Finance Process.

In their joint statement, the Asean+3 grouping said that despite a “more challenging global environment,” the region “continues to be a key driver of global economic growth.”

“We expect the economic growth of the Asean+3 region to remain steadfast, despite headwinds from trade frictions, softer external demand and tighter financial conditions,” they said.

Trade tensions between China and the US have been easing of late, but UK-based Oxford Economics, for instance, had projected that a truce between the two countries “may be within reach” but “permanent peace remains a more distant prospect” amid the US economy’s slowing momentum.

“While the region is not immune to threats of trade protectionism, the impact would be partly mitigated by robust regional consumption and growing intra-regional trade,” Asean+3’s central bank and finance chiefs said.

As such, they also reaffirmed their earlier commitment “to uphold the rules-based multilateral trading system and open regionalism, while resisting all forms of protectionism.”

“We are committed to further enhancing regional efforts, including accelerating intra-regional trade and investment activities, as well as further deepening our domestic capital markets in order to build resilience,” they said.

In this regard, the finance ministers and central bank governors adopted a vision document dubbed “Strategic Directions of Asean+3 Finance Process,” aimed at “[exploring] new potential areas of common interest and complementarity towards the strategic directions of fostering regional economic growth and promoting integration, while continuing the work on current initiatives to maintain regional economic and financial stability from a longer-term perspective.”