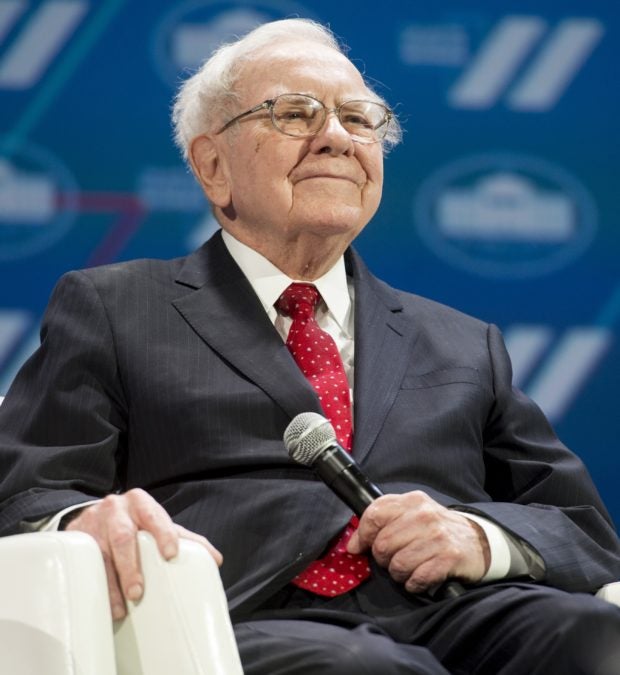 NEW YORK — Legend, icon, guru: Warren Buffett cuts a unique figure in the United States as a billionaire with a long track record of brilliant investing whose renown is softened by folksy midwestern charm.

Donning classic gray suits and colored ties, the 88-year-old “Oracle of Omaha” has managed to cultivate a humble and accessible persona despite his standing as the world’s third-richest person.

His following in his home country is cult-like, with thousands of small investors making a pilgrimage each spring for the annual meeting at Berkshire Hathaway, Buffett’s company.

The event takes place in Omaha, Nebraska, right in the middle of the United States, in the city where Buffett was born and has always lived.

“He is such a down-to-earth person,” said David Kass, a finance professor at the University of Maryland and the author of a blog on Buffett and Berkshire Hathaway.

Buffett evinces few of the trappings of the generally loathed “one percent.” He has lived in the same house since 1958 in a quiet neighborhood of Omaha.

RELATED TOPICS
Who Will Be Warren Buffett’s Successor?
What Bill Gates, Warren Buffett, Mother Teresa have in common
Taxing the Rich, an Idea Gaining Ground in the United States

His gastronomic tastes are also decidedly humble and include McDonald’s chicken McNuggets at least three times a week. He also favors potato chips for snacks, ice cream for dessert and an average of five cans of Coca-Cola per day.

Though raised middle class, Buffett did not have an easy childhood in some ways.

He has described going through a shoplifting phase and was forced to navigate around his abusive mother Leila, who used to berate his sister Doris as “stupid.”

In the biography “Giving it all away: The Doris Buffett story,” Warren Buffett acknowledges he did not stand up to his mother on Doris’ behalf, saying “I never did because I was afraid of becoming the target myself.”

Buffett’s commitment to philanthropy has further helped insulate him from popular resentment. He has donated billions of dollars to the Bill & Melinda Gates Foundation and has, like Gates, called for the wealthy to pay higher taxes.

Although Buffett makes some public appearances, he guards his privacy and keeps a tight circle of close advisors, including longtime Berkshire Vice Chairman Charlie Munger, who is 95, and shares Buffett’s straight-talking tendencies.

His circle of friends include JPMorgan Chase’s Jamie Dimon, who praised Buffett’s clinical approach to investing.

“He is always guided by the facts and his core principles — not emotion,” Dimon told AFP in an email. “He is grounded in long-held, proven principles, but willing to change and not rigid in his approach.”

Buffett is also a savvy communicator.

“He uses very short parables, stories and analogies,” Alice Schroeder, author of the Buffett biography “The Snowball,” told SeekingAlpha.com in 2010.

“He chooses key words that resonate with people — that will stick in their hands, like Aesop’s Fables,” she said. “It enables him to very quickly make a point without having to expend a lot of verbiage.”

Born on August 30, 1930 as the middle of three children, Buffett discovered an early taste for business after reading the book “One Thousands Ways to make $1,000.”

Buffett had designs on abandoning his studies, an idea vetoed by his father, a businessman and politician who served in Congress. He attended the Wharton School at the University of Pennsylvania as an undergraduate and later received a masters from Columbia University in New York in 1951.

Buffett worked on Wall Street in the 1950s, establishing the Buffett Partnership, which merged in 1965 with Berkshire Hathaway, a textile firm.

In the half-century since, Buffett has transformed Berkshire into a far-flung conglomerate worth more than $530 billion and known for investments in nuts-and-bolts sectors such as energy, banks, air travel and food.

His holdings include JPMorgan, Coca-Cola, Apple and American Express.

In general, Buffett’s approach is to delegate as much as possible on management questions, while maintaining control of assets.

And homespun charm has not stopped Buffett from wielding the corporate ax when necessary, as with Kraft Heinz, which Buffett acquired with 3G Capital, an investment firm known for severe cost-cutting.