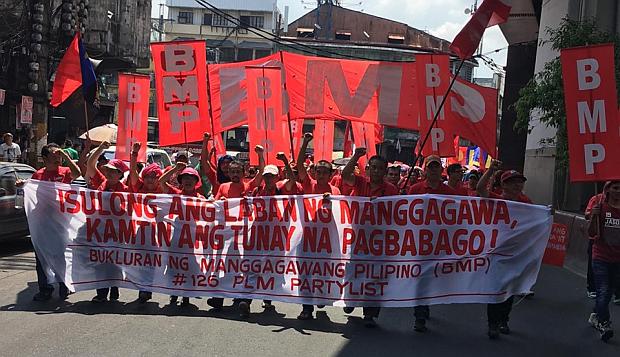 Members of the Bukluran ng Manggagawang Pilipino (BMP) march in Manila to mark Labor Day on May 1, 2019. According to a BMP study, the government owes Filipino workers P1.349 trillion, which reflects their contribution to the economic growth of the country. (Photo from the BMP Facebook account)

In a statement issued on Wednesday, Leody de Guzman, BMP chairman, said the government must pay workers a “just share in the fruits of production” for helping in the growth of the country’s economy.

[Though President Duterte and his allies in the House and Senate have been playing deaf to our plea for a national wage, workers should charge Duterte as head of the Philippine government for the amount of P1.349 trillion for the growth of the economy as a result of our productivity.]

Based on these numbers mapped on 240 working days per year, De Guzman said the government owed Filipino workers P1.349 trillion.

[According to the Constitution, workers should be given a just share in the fruits of production for his efforts. The growth in our gross domestic product has been big in the past year, but workers don’t feel any progress in their lives.]

According to De Guzman, the study only proves that the economic growth of a country means the same growth for its workers, adding that wage increases are only negated by the high price of commodities.

[What workers have been asking for are reasonable. We are not asking for the entire profits of the company. What we we are asking for is for our standard of living to be at the same level of progress achieved by society.]

BMP President Luke Espiritu, for his part, said the government could pay their debt to workers through tax exemptions.

[To pay for our contribution to the growth of the economy and society, the government could refrain from taxing workers through the withholding or income tax, EVAT, and excise tax. Instead, it should get the funds needed for social services from rich capitalists and foreign investors.]