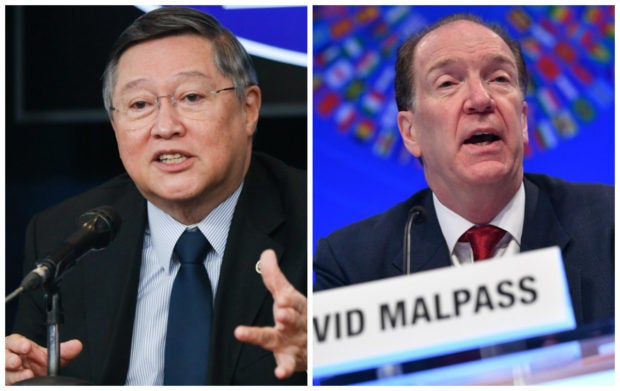 In particular, Finance Secretary Carlos Dominguez III said the World Bank Group and the Asian Development Bank (ADB) should align their efforts toward coming up with a “coordinated country program” especially for smaller members.

“Why do we have to get two economic reports from ADB and World Bank?” Dominguez said. “Maybe there’s a way to work together and to reduce overheads. I put myself in the place of a small country, why do I have to deal with two bureaucracies that do virtually the same thing?”

Malpass has welcomed Dominguez’s proposal for multilateral lenders to closely coordinate their development efforts in the Asia-Pacific region, and said closer ties with ADB would be a good starting point.

The World Bank chief also encouraged Dominguez to come up with more proposals on how the bank, in particular, can perform better in helping the Philippines accelerate its sustainable growth.

Malpass, who assumed the World Bank Group presidency on April 9, also took the opportunity to congratulate the Philippines on the reforms it has been implementing, especially its tax reform program, which, he said, “is working well.”

During his meeting with Malpass, Dominguez reiterated his call for World Bank and ADB to coordinate their work in the region to help reduce overhead costs not only for both institutions but also for countries seeking development assistance, in terms of lowering their operational expenses and borrowing rates.

In response, Malpass said a coordinated country program, which should start with a coordinated economic outlook, is now being worked out to begin doing away with redundancies, such as the economic reports that Dominguez had pointed out.

Aside from Dominguez, the finance ministers of Cambodia and Vietnam also called on ADB and World Bank to work in synergy and complement their efforts in alleviating poverty in the region.

The newly elected World Bank Group president noted that coordination, as pointed out by Dominguez, is necessary to avoid one institution absorbing high front-end costs for a particular project and another institution offering a lower financing package and ending up getting the credit.

Malpass suggested that the two institutions create a subgroup that would focus discussions on a specific aspect of development assistance, such as infrastructure, to avoid redundancies and ensure that projects are done efficiently. /kga