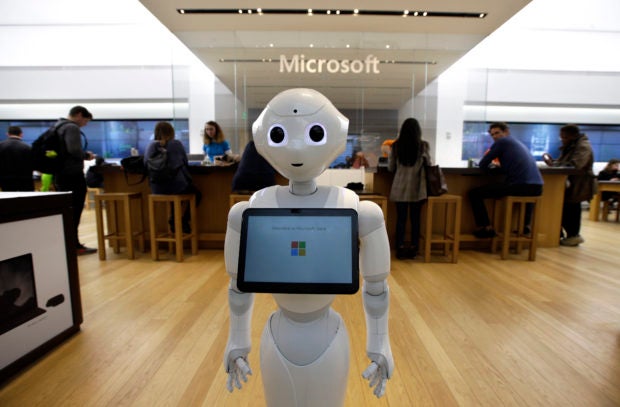 In this March 21, 2019, file photo a robot called “Pepper” is positioned near an entrance to a Microsoft Store location, in Boston. Microsoft Corp. reports earnings Wednesday, April 24. AP FILE PHOTO

REDMOND, Washington — Microsoft’s ongoing push to get automakers, retailers and other businesses onto its cloud computing platform helped power the company’s third-quarter earnings ahead of Wall Street expectations Wednesday.

The software maker posted fiscal third-quarter earnings of $8.8 billion, up 19% from the same period last year. The Redmond, Washington-based company said it had profit of $1.14 per share, beating the $1 per share anticipated by analysts.

Amid a decline in its legacy Windows software business, much of Microsoft’s growth in recent years has come from selling its cloud services to other businesses and governments.

ExxonMobil announced in February a deal to tap into Microsoft’s cloud platform and artificial intelligence to capitalize on the shale oil boom in Texas and New Mexico.

Microsoft is battling Amazon for a multibillion contract to supply the U.S. military with cloud computing services. The Pentagon could award the contract as early as this summer. Microsoft has already won a smaller $480 million contract to build HoloLens augmented reality headsets for soldiers.

In the gaming sector, Microsoft said Wednesday that revenue from its Xbox division grew 5%, with 12% growth in software and services offsetting a decline in hardware sales. The company is preparing to launch its first diskless console next month as it braces for increasing competition from new forms of gaming, such as a Google’s console-free game streaming service due out later this year.

Microsoft shares have risen 23 percent since the beginning of the year, while the Standard &amp; Poor’s 500 index has risen 17 percent. In the final minutes of trading on Wednesday, shares hit $125.07, an increase of 34 percent in the last 12 months.

Microsoft said Wednesday it returned $7.4 billion in the quarter to shareholders in the form of share repurchases and dividends.