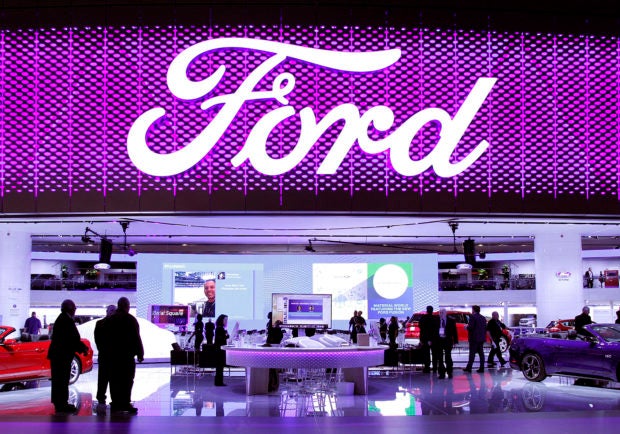 In this file photo taken on January 11, 2016, the Ford exhibit is shown on the first day of media preview days at the 2016 North American International Auto Show in Detroit, Michigan. – Ford Motor Co. said on April 24, 2019, it was investing $500 million in Rivian as part of a strategic partnership with the startup developing electric pickup trucks and sport utility vehicles. AFP FILE PHOTO

NEW YORK — Ford Motor Co. said Wednesday it was investing $500 million in Rivian as part of a strategic partnership with the startup developing electric pickup trucks and sport utility vehicles.

The tieup will enable Ford to develop its own branded electric vehicle using Rivian’s “flexible skateboard platform,” according to a statement from the two companies.

“As we continue in our transformation of Ford with new forms of intelligent vehicles and propulsion, this partnership with Rivian brings a fresh approach to both,” said Jim Hackett, Ford president and chief executive.

“At the same time, we believe Rivian can benefit from Ford’s industrial expertise and resources.”

Rivian, one of several startups following the model of Tesla on electric vehicles, has also received $700 million led by Amazon earlier this year.

Prior to our East Coast debut at the @NYAutoShow, we followed one of our engineers from Tribeca to Westhampton Beach for a quick city escape in the #R1T. Here is Dune Road in all its misty glory. pic.twitter.com/K0viNth3Ua

Last year, the startup unveiled an electric pickup truck and an electric sport utility vehicle at an auto show in Los Angeles. The vehicles were set to be manufactured at the startup’s plant in Illinois, with deliveries to customers expected to begin late in 2020.

Rivian will remain independent under its partnership with Ford, which will hold a minority stake, the companies said.

We have some exciting things in store for our community of future #Rivian owners. Till then, we’ll be over here reminiscing on our last hurrah in #NYC just a few days ago at the @CCCManhattan. pic.twitter.com/ytnwUEdkeP

“This strategic partnership marks another key milestone in our drive to accelerate the transition to sustainable mobility,” said Rivian founder and CEO RJ Scaringe.

“Ford has a long-standing commitment to sustainability, with (Ford executive chairman) Bill Ford being one of the industry’s earliest advocates, and we are excited to use our technology to get more electric vehicles on the road.”

The news comes with Tesla ramping up production of its electric cars, having unveiled plans to launch self-driving electric “robotaxis” by 2020. Several other startups in the US and elsewhere are planning to launch all-electric vehicles in the next few years.