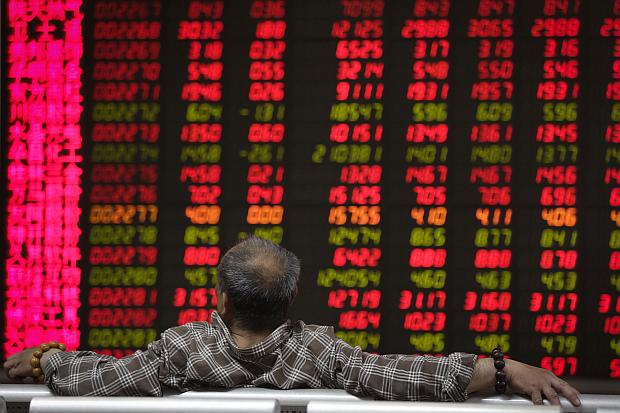 A man looks at an electronic board displaying stock prices at a brokerage house in Beijing, Wednesday, April 24, 2019. Shares were mostly lower in Asia on Wednesday despite the S&P 500’s all-time record high close the day before. (Photo by ANDY WONG / AP)

BANGKOK — Stock markets were subdued in Europe and Asia on Wednesday as investors look to corporate earnings for clues on whether the S&P 500 will hit another all-time record close.

The lackluster start for the day followed news that a U.S. delegation will visit Beijing next week to continue trade negotiations. Chinese officials will visit Washington for more talks starting May 8.

They are aimed at resolving a dispute over Beijing’s technology policies and other issues that has clouded the economic outlook and shaken financial markets.

The benchmark S&P 500’s previous record was set last September, shortly before the market sank in the fourth quarter amid fears of a recession, an escalating trade war between the U.S. and China, and concern the Federal Reserve was moving too aggressively to raise interest rates.

Those concerns have eased or taken a back seat this year to more optimism among investors, who seem more optimistic about the global economy and Fed policy after the central bank signaled it might not raise interest rates at all in 2019.

So far, stocks have been lifted by relatively strong earnings results and optimistic corporate forecasts. On Wednesday, investors will keep an eye out for the quarterly report from Boeing in particular for updates on the fate of the company’s best-selling plane and when it might fly again.

Read Next
Tesla CEO heads down perilous road in pursuit of profit
EDITORS' PICK
What to expect as Metro Manila starts ‘no vaccination, no ride’ policy on Monday
Metro Manila’s daily COVID-19 growth rate drops to 2% — Octa Research
Over 3 Million worth of prizes to be won at Smart Padala’s SENDali Manalo Promo!
SMDC’s Bloom Residences: A master planned community that cares for your health and wellness
COVID-19 cases in PH pass 3.2 million mark with 37,154 new cases — DOH
Upsilon, Unilever give ‘real talk’ on climate change crisis
MOST READ
IATF protocols now apply to travelers who arrived on or before Jan. 13
‘Not my loss’: Did Kris Aquino just comment on her breakup with Mel Sarmiento?
Thailand records first Omicron death
Tito, Vic and Joey still not quitting, breaking trends as they celebrate 50th year in the biz
Don't miss out on the latest news and information.