Twitter shares lift off as profits soar; Trump weighs in 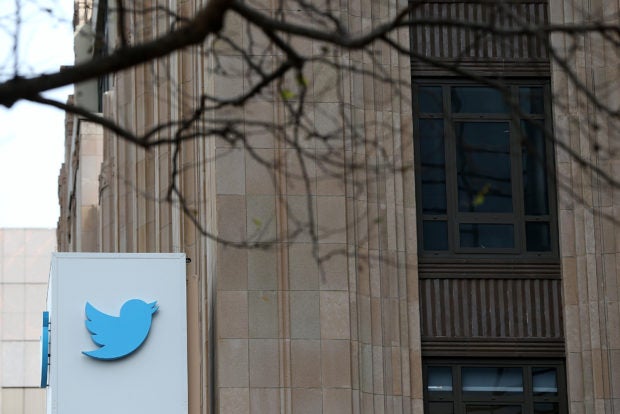 In this file photo taken on February 5, the twitter logo stands outside the Twitter headquarters in San Francisco, California. – Twitter said on April 23, 2019, profits soared in the past quarter, and President Donald Trump immediately claimed credit for the success of the short messaging platform even as he renewed his allegations of bias. Profits in the first quarter hit $191 million, compared with $61 million a year earlier, while revenues increased 18 percent to $787 million. AFP FILE PHOTO

WASHINGTON — Twitter shares flew higher Tuesday after a surprisingly robust quarterly report, which sparked a fresh tirade from President Donald Trump over his claims of unfair treatment by social media.

You mean the Stock Market hit an all-time record high today and they’re actually talking impeachment!? Will I ever be given credit for anything by the Fake News Media or Radical Liberal Dems? NO COLLUSION!

The first-quarter report showed a profit of $191 million, compared with $61 million a year earlier, while revenues increased 18 percent to $787 million for the short messaging platform.

Twitter shares soared 15.6 percent to close at a nine-month high of $39.76 after the update from the short messaging platform, showing gains in advertising revenue and some signs that its user base is growing.

Trump, arguably the platform’s most prominent user, sought to claim credit for the strong Twitter results while renewing his allegations of bias.

On his Twitter feed, Trump said the results were good but could be better “if Twitter wasn’t playing their political games” and argued for “more, and fairer, companies.”

Twitter’s global user base appeared to show modest growth even as the company transitions to a different way of measuring it.

The longstanding metric of monthly active users was 330 million in the January-March period, an increase of nine million from the past quarter but down slightly from a year ago.

But Twitter no longer will use that measure, switching instead to “monetizable” daily active users — 134 million in the past quarter, up from 120 million last year.

Chief executive Jack Dorsey said Twitter is benefiting from its moves to root out abusive and inauthentic content that had hurt Twitter’s reputation.

“We are taking a more proactive approach to reducing abuse and its effects on Twitter,” said Dorsey.

“We are reducing the burden on victims and, where possible, taking action before abuse is reported.”

Twitter has also faced intense pressure from governments around the world to remove “hate speech” and incitements to violence.

Dorsey said much of the effort to deal with inappropriate content is based on machine learning and other technical tools, enabling Twitter to “proactively” remove tweets that violate its terms of service.

“Our number one priority as a company continues to be health,” Dorsey told a conference call.

He added that Twitter aims to become “more conversational” and has launched a prototype for a new app called “twttr,” with the goal of “making conversation on Twitter feel faster, more fluid and more fun.”

Dorsey said the experimental app enables users “to see the entire conversation on one surface” without needing to click through various tweets.

The messaging platform has become an important tool for celebrities, politicians and journalists, but has failed to grow as quickly as Facebook and other social media among mainstream internet users.

Its troubles had sparked speculation that it might need to sell itself to survive.

Trump, who uses the platform for policy and political commentary, appeared to take credit for Twitter’s turnaround, even as he renewed his claims of bias.

“The best thing ever to happen to Twitter is Donald Trump,” the president tweeted after the quarterly update, borrowing a quote from a television journalist.

“So true, but they don’t treat me well as a Republican. Very discriminatory, hard for people to sign on. Constantly taking people off list. Big complaints from many people.”

Shortly after, but away from TV cameras, Trump received Dorsey at the White House, the president’s spokeswoman Sarah Sanders told AFP, without detailing their discussions.

“Lots of subjects discussed regarding their platform, and the world of social media in general. Look forward to keeping an open dialogue!” Trump said alongside a photo of Dorsey and others in the Oval Office.

Twitter told AFP that Dorsey “had a constructive meeting” with Trump at the president’s invitation.

“They discussed Twitter’s commitment to protecting the health of the public conversation ahead of the 2020 US elections and efforts underway to respond to the opioid crisis,” Twitter said.

Trump has over several months maintained that Twitter and other Silicon Valley platforms have discriminated against conservatives, a claim roundly rejected by tech firms.

The quarterly results appear to show Twitter on a positive track, according to Jasmine Enberg of the research firm eMarketer.

Enberg said the move to use monetizable daily active users — those seeing ads on the platform — leads to a “value proposition to advertisers” to reach “a committed, though not very large user base when compared with other social platforms.”