The Philippine Institute for Volcanology and Seismology said on Tuesday that a magnitude 6.5 earthquake hit San Julian, Eastern Samar in Visayas less than a day after a magnitude 6.1 quake struck Zambales in Luzon.

Data from the PSE showed that only the property subsector ended in positive territory as it gained 0.85 percent. Losers were led by services, down 0.84 percent, followed by holding firms, down 0.49 percent. 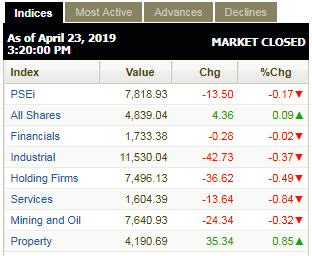 Volume was relatively thin with about 569.4 million shares valued at P6.6 billion changing hands. There were 120 decliners against 72 gainers while 47 companies closed unchanged.