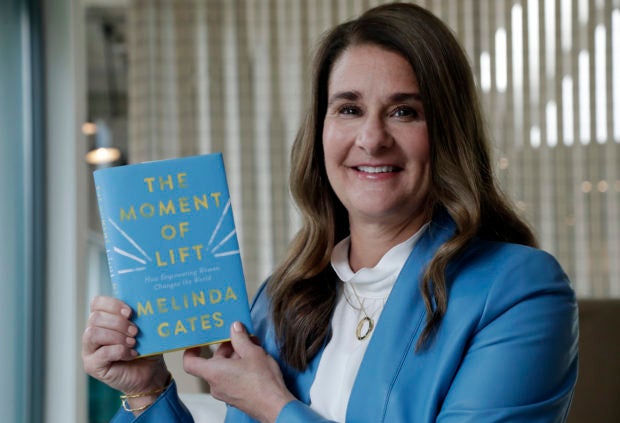 In this photo taken Thursday, April 18, 2019, Melinda Gates poses for a photo with her new book, “The Moment of Lift,” in Kirkland, Wash. Her new book is a memoir from the former Microsoft tech business executive, outspoken feminist and public supporter of the MeToo movement. The Associated Press reviewed an advanced copy of the book ahead of its release Tuesday. AP

SEATTLE — Looking back at her time as an early Microsoft employee, Melinda Gates said the brash culture at the famously tough, revolutionary tech company made her want to quit, but that she didn’t discuss it with her boyfriend, and later her husband, Bill Gates, the company CEO who embodied that culture.

“That wasn’t my job to do that at the time,” Gates said in an interview with The Associated Press, adding that she drew “bright lines” around the office and home in order to work there for nine years before she left to have children.

Here’s what I hope readers take away from my new book, The #MomentofLift. pic.twitter.com/aVgMrdAZ8M

Her new book, “The Moment of Lift,” is a memoir and manifesto on women and power from the former tech business executive, outspoken feminist and public supporter of the #MeToo movement. The Associated Press reviewed an advanced copy of the book ahead of its release Tuesday. All book proceeds will be donated to charity.

Missing from the memoir is how her relationship with Gates affected her experience at Microsoft. And she said it’s difficult to look back to 30 years ago to say how things might be different today if he had made a move on an employee at work, back when the company was 1% of its current size.

“It’s impossible to project how that was different,” she said.

Gates didn’t say in the interview if she ever had doubts about starting a relationship with her company CEO.

There are concrete actions we all can take in our day-to-day lives to make real progress towards gender equality. How will you commit to the lift? Share with #MomentofLift. https://t.co/Rzu0vMLBCE pic.twitter.com/qnVhuf5A6r

The book trails her life from Catholic school girl in Texas, to young tech leader at Microsoft; and from her private struggles as the wife of a dominating public icon and stay-at-home mom with three kids, to finding her professional purpose as a champion of women through venture capital and philanthropy.

The Seattle-based Bill and Melinda Gates Foundation’s $50 billion endowment makes it the world’s largest private foundation. Much of its resources are spent on global health and development, which informed the many academic interpretations of world poverty issues that make up the majority of the book. Illustrated by vivid, heartbreaking anecdotes on how those problems cause death and suffering, it is told from her extraordinary perch as one of the world’s richest people.

And it’s also part celebrity memoir that delves into her personal life. She won Bill Gates’ heart after meeting at a work dinner, sharing a mutual love of puzzles and beating him at a math game. Their children enrolled in school under her maiden name, “French,” to give them anonymity. At a time when she was still discovering how gender roles were engrained in her, he offered to do school drop-offs, which then influenced other fathers to take on the task.

On women and power, Gates outlines her agenda tackling poverty in developing nations and evolution from reluctant to proud feminist pushing for equality in the American workplace after a largely positive but also at times frustrating experience at Microsoft.

Melinda Gates said she learned to adapt by being herself despite Microsoft’s abrasive style because she loved the work while she was there in the 1980s and 1990s. She said she recruited some of the best in the company who appreciated her kinder leadership style.

She also describes how the couple evolved to become more and more equal since starting the foundation together in 2000. She gives Gates feedback often and is adamant about creating a collaborative culture at their powerful nonprofit.
“Bill and I are equal partners,” Melinda Gates said. “Men and women should be equal at work.”