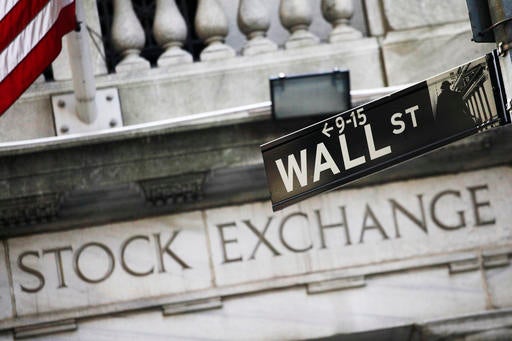 U.S. stocks fell despite data showing Chinese gross domestic product growth held steady in the latest quarter in the face of a tariff war with Washington and consumer spending accelerated.

Wall Street’s slide was led by health care stocks. Investors fear the potential impact on profits from reform ideas being discussed in Washington and on the presidential campaign trail.

Qualcomm led gains in the technology sector. Intel climbed after pulling out of the smartphone modem market.

T-Mobile and Sprint slumped on reports the Justice Department is questioning their proposed merger.

On Wall Street, the future for the benchmark Standard & Poor’s 500 index was up 0.2% and that for the Dow Jones Industrial Average was up 0.3%.

US-CHINA TRADE: The Wall Street Journal reported U.S. and Chinese negotiators are planning two more rounds of meetings aimed at ending a tariff war over Beijing’s technology ambitions. The newspaper, citing unidentified sources, said the two sides are aiming for a signing ceremony in late May or early June. The countries have raised tariffs on billions of dollars of each other’s goods, rattling global financial markets. Washington and other trading partners say Beijing’s plans for state-led creation of Chinese competitors in robotics and other technologies violate its market-opening commitments.

US ECONOMY: The Federal Reserve says the economy expanded at a moderate pace in March and early April, despite uncertainty caused by trade tensions and Midwest flooding. The Fed’s “beige book” on economic conditions said weakness remained, especially in sluggish consumer spending, which accounts for two-thirds of economic activity. The report will form the basis for discussion when central bank officials meet April 30-May 1 to discuss interest rates.

ENERGY: Benchmark U.S. crude lost 13 cents to $63.63 per barrel in electronic trading on the New York Mercantile Exchange. The contract fell 29 cents on Wednesday to close at $63.76. Brent crude, used to price international oils, declined 26 cents to $71.66 per barrel in London. It shed 10 cents in the previous session to $71.62.