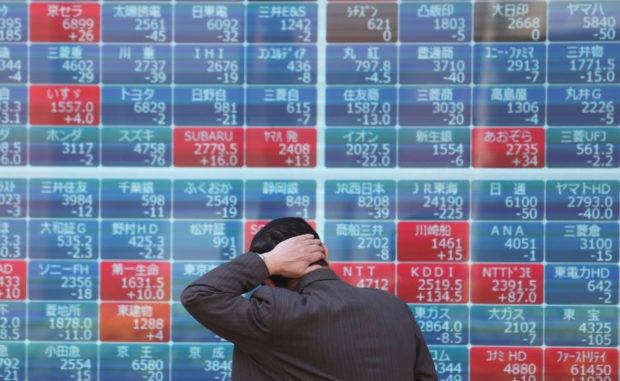 A man looks at an electronic stock board of a securities firm in Tokyo, Tuesday, April 16, 2019. Shares were mixed Tuesday in Asia in mostly narrow trading in the absence of any major market-driving news.(AP Photo/Koji Sasahara)

TOKYO – Shares were mixed Tuesday in Asia in mostly narrow trading in the absence of any major market-driving news.

Upbeat talk from the White House on trade negotiations with the China failed to lift Chinese shares.

Meanwhile, China’s central bank, The People’s Bank of China, said it was adjusting its monetary policy to coordinate with government spending.

On Wall Street, the S&amp;P 500 index edged lower, weighed down by bank shares after Goldman Sachs said it’s off to a “muted start to the year,” even though its earnings for the first quarter still beat analysts’ expectations.

Citigroup also slipped following its earnings report, as banks lead off a quarterly reporting season that analysts expect to be the weakest in nearly three years.

The S&amp;P 500 remains within 0.9% of its record following a torrid start to the year, after the Federal Reserve said it may not raise interest rates at all in 2019.

Optimism has also grown that the U.S. and China can resolve their trade dispute. U.S. Treasury Secretary Steven Mnuchin said Saturday that the world’s two largest economies were moving closer to an agreement.

The yield on the 10 year Treasury note held steady at 2.55%. It has been climbing since late last month, when it fell to 2.37% amid a crescendo of worries that global economic growth was slowing.