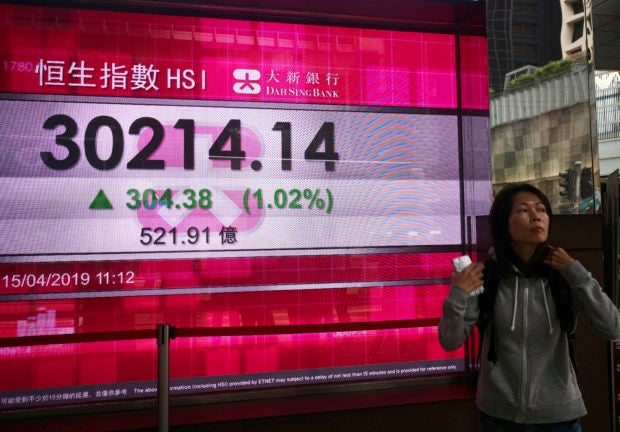 A woman walks past an electronic board showing Hong Kong share index outside a local bank in Hong Kong, Monday, April 15, 2019. Asian markets were broadly higher Monday on signs that the U.S. and China were closing in on a trade deal after months of negotiations.(AP Photo/Vincent Yu)

SINGAPORE – Asian markets were mostly higher Monday on signs that the U.S. and China were closing in on a trade deal after months of negotiations.

Stocks rose in Taiwan and Indonesia but fell in the Philippines.

On Saturday, U.S. Treasury Secretary Steven Mnuchin told reporters that the U.S. and China were moving closer to an agreement on trade.

Speaking on the sidelines of the International Monetary Fund and World Bank spring meetings, Mnuchin said the U.S. and China had held phone discussions last week and he wasn’t sure if more face-to-face meetings would be needed. He did not give a timeframe for when negotiations might be wrapped up.

Mnuchin added that the proposed agreement has seven chapters and will allow both countries to set up enforcement offices to make sure the deal is followed.

This fueled hopes that a wide-ranging dispute between the world’s two biggest economies could soon be put to rest.

Chinese foreign ministry spokesman Lu Kang said Thursday that the discussions were “moving forward” and “new substantial progress” was made.

Last week, China reported that its exports in March rose 14.2% from a year earlier. This was a turnaround from a 20.8% contraction in February, signaling stronger global demand. Sales to the American market also accelerated despite President Donald Trump’s tariffs of up to 25% on $250 billion of Chinese goods.