China reported exports rose 14.2% over a year earlier, rebounding from March’s 20.8% contraction in a sign of stronger global demand. 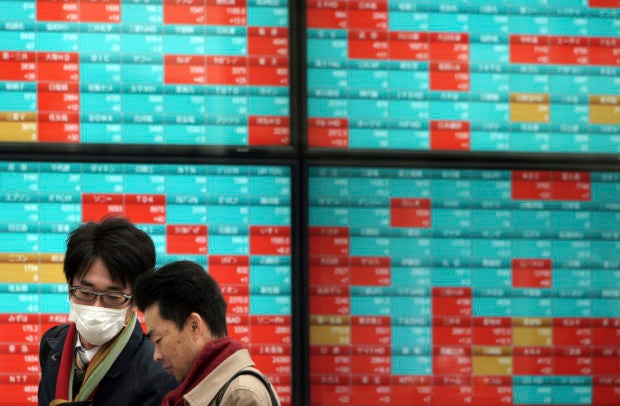 In this Feb. 19, 2019, photo, people talk in front of an electronic stock board showing Japan’s Nikkei 225 index at a securities firm in Tokyo. Asian stock markets were mostly higher Friday, April 12, 2019, after a mixed Wall Street close on listless trading.(AP Photo/Eugene Hoshiko)

The U.S. market gave back some of the previous day’s gains after minutes from the latest Federal Reserve meeting showed the majority of officials want to keep interest rates unchanged. Investors want the central bank to take a more laid-back approach to avoid triggering a market slump.

Traders are focused on company earnings reports the next few weeks in hopes of gleaning fresh clues about the trajectory of the economy.

Analysts expect companies in the S&amp;P 500 to report a 3.3% drop in earnings per share from a year earlier, which would be the first decline since the spring of 2016. The expected drop in profits is due almost entirely to weaker profit margins.

CHINA AUTO SALES: Auto sales in the global industry’s biggest market fell again in March, declining 6.9% from a year ago, but the contraction was smaller than in recent months. It was the ninth straight month of decline amid broader consumer malaise but an improvement over the 17.5% contraction in January and February. The slump comes at an awkward time as global and Chinese automakers spend heavily to develop electric vehicles under government pressure to boost sales.