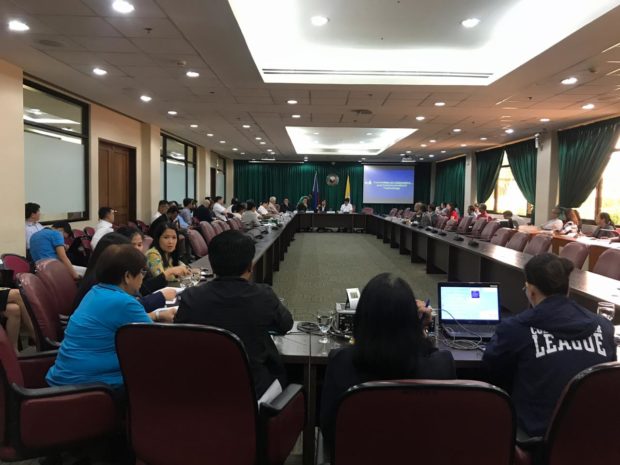 The House of Representatives conducts a hearing on the roll out plans of telecommunications companies for addressing the backlog of cell sites on April 8, 2019. PHOTO by Noy Morcoso/INQUIRER.net

At a House committee on information and communications technology hearing, Rio said their technical working group meetings with PLDT’s Smart Communications, Globe Telecom, and newest player, Mislatel Consortium, are now ongoing, and they are targeting to come up with proof of concept in two to three months.

“The meeting continues so that by two to three months, we will have a proof of concept involving about one thousand towers, hard to get places, ‘yung mga (the) missionary areas on the spectrum on where the towers are supposed to be,” the DICT Chief told the panel.

Rio explained that the proof of concept would allow the telcos to “create one procedure on how to initiate the establishment of common towers” in more than 1,000 areas which they had already identified across the country. He added that 19 tower companies have applied and signed a memorandum of understanding (MoU) with the DICT.

“… (F)rom the result of this proof of concept they can improve the mechanics of having a common tower in the Philippines moving towards putting up 50,000 towers in seven to 10 years,” he added.

Rio said they hope to start the bidding process for the common tower providers right after the proof of concept is finalized.

“Pero bahala na ‘yung telcos (na pumili)… Ayaw namin na gobyerno ang pipili because hindi naman kami ang magbabayad sa common towers, it will be the telcos (The telcos should choose. We do not want to be involved in the selection process because we are not going to spend for the common towers),” Rio told reporters in a separate interview.

“It affects the quality of service and the coverage being enjoyed by citizens… More or less we need 50,000 towers to catch up over and above the 18,000 towers we currently have,” he said.

The DICT earlier said they are set to finalize the common tower policy by the second quarter of 2019. But the official implementation of the policy would still depend on the outcome of the proof of concept, according to Rio.

Rio also said the policy, which would allow the three telcos to share communications towers, would significantly cut their capital expenditures and would eventually improve cellular services in the country. He added that the program would generate a gross income estimated to reach $4 billion or about P200 billion for the country.

The policy, he added, could eventually help the government improve the implementation of the Republic Act No 10929 or the “Free Internet Access Program” in public places.

But Rio said they need the Philippine Competition Commission (PCC) to step in  cases where subdivisions refuse to allow the construction of towers inside their area.

“Ito lang po (This is) where we will need some help from PCC, some malls and subdivision allow only one telco to come in. It’s something PCC can decide na bawal ‘yan (it’s prohibited)… there are also subdivisions that do not allow anyone to come in,” he said.

“Radio frequencies from a cell site affects you not at at all… If the cell phone is far away from the tower, the cellphone radiates more energy. So it is actually advantageous sana (hopefully) for them na may tower sila ng loob ng subdisvision nila (that they have a tower inside their subdivision),” Galla explained, adding that the nearer the cellphone is to a cell site, the lesser the energy it would need to radiate; thus, extending the  battery life.

“The only logical explanation for refusal to put a tower probably aesthetic purposes,” he added. /ee