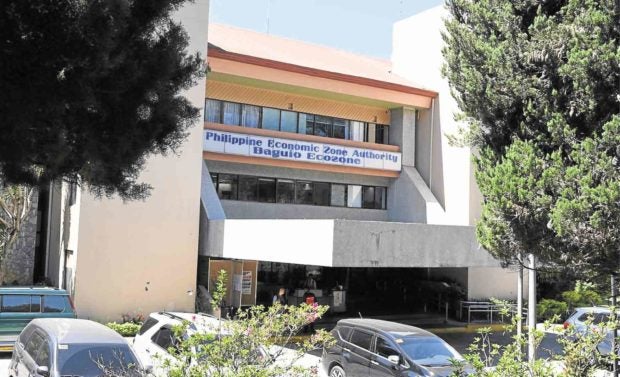 JOB GENERATOR The Baguio City Economic Zone, which is celebrating its 40th anniversary this year, is among the biggest job generators in the summer capital. —EV ESPIRITU

BAGUIO CITY — The Philippine Economic Zone Authority (Peza) is rebranding and will relaunch a plan to help towns and cities penetrate the export market by putting up new economic zones for food production, mineral processing, entertainment and tourism.

But the “New Peza,” as it will be called, is still haunted by issues that have discouraged investors, such as high power costs and a pending congressional measure that will rework benefits granted to businesses operating in economic zones.

At present, Peza manages over 370 economic zones, most of them business process outsourcing (BPO) companies operating in information technology buildings.

The agency will also introduce knowledge and technology innovation zones to be put up by public and private universities, to be modeled after Silicon Valley in California where top technology firms are concentrated.

Government studies confirmed that only 30 percent of graduates were employable because they completed courses that were not in demand at job markets, she said.

The economic zones should be designed as “townships,” or smart cities, with housing facilities, banks and commercial establishments like shopping malls, “so company officials and employees won’t need to travel in and out of the ecozones,” Plaza said.

Peza has asked local governments to submit a list of government lands that could host economic zones.

Plaza said Peza’s rebranding campaign would be launched on April 30 despite issues about the government’s comprehensive tax reform program.

Investments dipped in 2018 and early this year, she said, because companies were waiting for the results of May’s midterm elections.

Businesses have also been upset about a second Tax Reform for Acceleration and Inclusion (TRAIN) measure, which introduces a wide range of corporate tax reforms, Plaza said.

The House of Representatives had approved its version of TRAIN 2, renamed the “Trabaho bill,” but “some senators said they won’t pass the measure at least in this Congress,” she said.

“The Senate saw the impact of the first TRAIN law (Republic Act No. 10963 which imposed higher excise taxes on core products like oil), and had reservations about passing TRAIN 2 because of the reactions from industries,” Plaza said.

“The industries said they were happy about the Peza incentives. They ask, ‘Why are we changing the rules? Why are you fixing something that is not broken,’” she said.

She said the new TRAIN measure should separate incentives meant for export processing firms from tax benefits it would grant to domestic enterprises.

Her position has been supported by the Union of Local Authorities of the Philippines, which asked Malacañang and Congress to exempt Peza from TRAIN 2.

Peza has transmitted its concerns to Malacañang. Plaza said President Duterte had not offered any reactions because he “respects the independence of Congress.”

“But he has been listening to our argument that retaining Peza tax perks means maintaining the country’s competitiveness in the global market,” she said, adding:

“Countries like China offer far generous incentives. [That fact] would draw foreign investments away from the country if the government cuts down Peza benefits.”

Expensive electricity remains a problem for Peza, Plaza said, because it would take time for the government to draw more power generation companies to increase supply.

Mindanao has excess power and lower electricity rates compared to Luzon that gives the island an edge in drawing new businesses, she said.