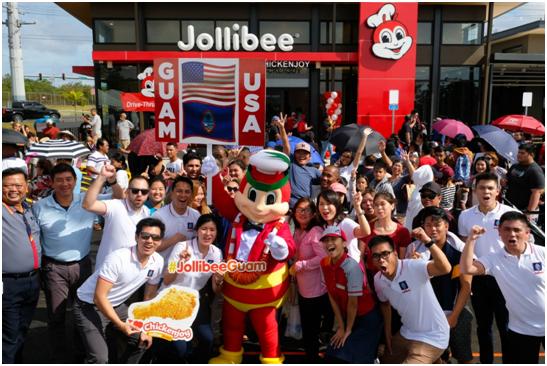 An enthusiastic crowd of over 900 celebrated the opening of Guam’s first Jollibee restaurant in front of Micronesia Mall on April 6, 2019. (Photo courtesy of Jollibee)

According to Jollibee, its Guam store is part of the company’s accelerated global expansion plans in a bid to join the “Top 5 restaurant companies” in the world.

“The standalone Jollibee store seats 205 and it’s in front of Micronesia Mall in Dededo, the most populous village in Guam,” Jollibee said.

“An estimate of over 1,000 enthusiastic fans lined up with some queuing for 12 hours to celebrate the first day of Jollibee’s Guam store,” it said.

According to Jollibee, the Guam store is its 38th store in the United States territory.

Meanwhile, Dennis Flores, president and head of the company’s international business across Europe, Middle East, Asia and Australia, said that he was amazed by the support of the residents in Guam during the branch opening.

“It was so fun to see such a diverse, eclectic group of people who call Guam home queueing up to enjoy our offerings and to experience the joy of eating delicious food together,” he said.

The fast food giant recently announced its accelerated North American expansion plan, which includes growing to 150 locations in the US and 100 in Canada for the next five years.

JFC is the parent company of Jollibee and has 14 brands with over 4,500 stores across 21 countries. /jpv