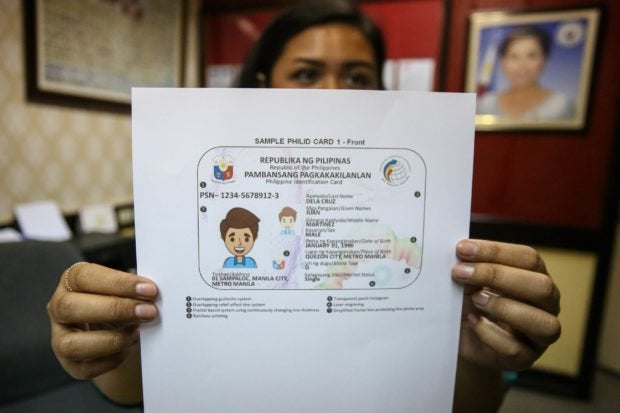 ID SAMPLE A Philippine Statistics Authority employee presents at the House a sample of the ID to be issued under the national ID system. —JAM STA. ROSA

MANILA, Philippines – Estonian firms are interested to participate in the government’s implementation of the national ID system, the Department of Finance (DOF) said Thursday.

“We are aware that the Philippines is about to implement the digital ID and provide their citizens with this. It is indeed a good time to come here and demonstrate what you could possibly be able to implement provided the digital ID is properly secured in place,” Estonia’s ambassador-designate to the Philippines Vaino Reinart was quoted by the DOF as telling Finance Secretary Carlos G. Dominguez III during a recent meeting.

In response, Dominguez welcomed the interest from Estonian companies and invited them to bid for the contract to rollout the national ID system.

“Our number one interest right now is the national ID, and we are going to be putting out the international tender docs pretty soon,” Dominguez told the Estonian delegation, which DOF said included firms that developed the European country’s electronic governance system such as Aktors, Cybernetica, Ecomatic, GoSwift, and RaulWalters.

In a statement, DOF noted Estonia as “the world’s most advanced digital society.”

“In the Baltic nation of Estonia, where the electronic video communications tool Skype was developed, 99 percent of public services are available digitally, including the filing and payment of taxes,” it said.

For his part, Dominguez enjoined the Estonian government to hire young, skilled, and English-speaking Filipino workers for its booming technology sector.

“We would like to encourage you to look at us as potentially your demographic partners here. I think Filipinos around the world have a relatively good reputation,” according to Dominguez.