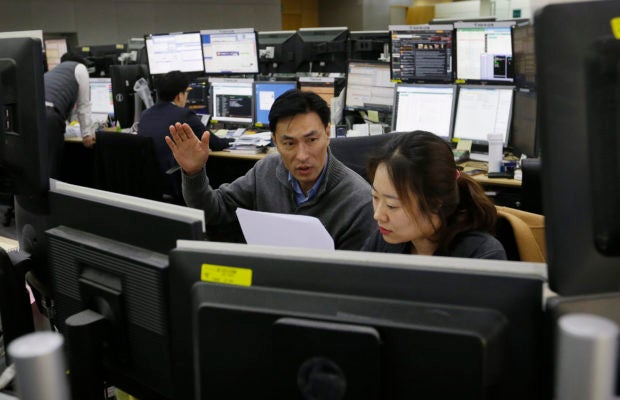 Currency traders work at the foreign exchange dealing room of the KEB Hana Bank headquarters in Seoul, South Korea, Wednesday, April 3, 2019. Asian markets rose on Wednesday ahead of the continuation of trade talks between the U.S. and China in Washington. (AP Photo/Ahn Young-joon)

SINGAPORE – Global markets were mostly higher on Wednesday ahead of the resumption of trade talks between the U.S. and China in Washington.

Britain’s FTSE 100 was 0.2 percent higher at 7,403.73, after Prime Minister Theresa May said she plans to seek another Brexit delay and hold talks with the opposition to reach a compromise.

China’s Caixin Services PMI, a survey of service industry purchasing managers, had a reading of 54.4 in March.

This is markedly better than February’s reading of 51.1 and the sharpest improvement since January 2018.

The index is on a 100-point scale, with 50 separating contraction from growth. This added to optimism after China released encouraging manufacturing data over the weekend.