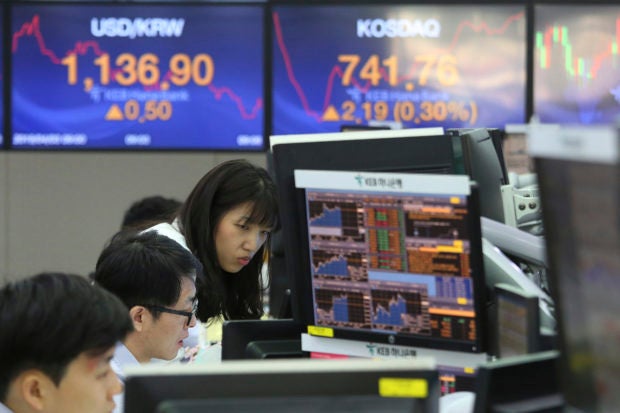 A currency trader watches monitors at the foreign exchange dealing room of the KEB Hana Bank headquarters in Seoul, South Korea, Wednesday, April 3, 2019. Asian markets rose on Wednesday ahead of the continuation of trade talks between the U.S. and China in Washington. (AP Photo/Ahn Young-joon)

SINGAPORE – Shares rose in Asia on Wednesday ahead of the resumption of trade talks between the U.S. and China in Washington.

Shares were higher in Taiwan and Singapore but  fell in the Philippines.

Trade negotiations between the U.S. and China are due to restart later Wednesday in Washington.

Negotiators from the world’s two biggest economies are aiming to put to rest a dispute over technology and other issues. They met in Beijing last week.

Both sides have said they were making progress toward a deal, but how close they are getting is unclear.

“There has been so much chatter that U.S.-China trade is in the price and there is obvious merit to that as we have been talking about ‘progress’ for many months,” Chris Weston of Pepperstone Group Limited said in a market commentary.

China’s Caixin Services PMI, a survey of service industry purchasing managers, had a reading of 54.4 in March. This is markedly better than February’s reading of 51.1 and the sharpest improvement since January 2018.

The index is on a 100-point scale, with 50 separating contraction from growth. This added to optimism after China released encouraging manufacturing data over the weekend.

On Wall Street, a listless trading day resulted in an uneven finish for stock indexes.

Gains by big technology companies were offset by losses in other sectors. The broad S&amp;P 500 index was almost flat, finishing at 2,867.24 on Tuesday.

ENERGY: Benchmark U.S. crude picked up 26 cents to $62.84 per barrel in electronic trading on the New York Mercantile Exchange. The contract added 99 cents to $62.58 per barrel on Tuesday. Brent crude, used to price international oils, gained 40 cents to at $69.77 per barrel. It closed 36 cents higher at $69.37 per barrel in London.