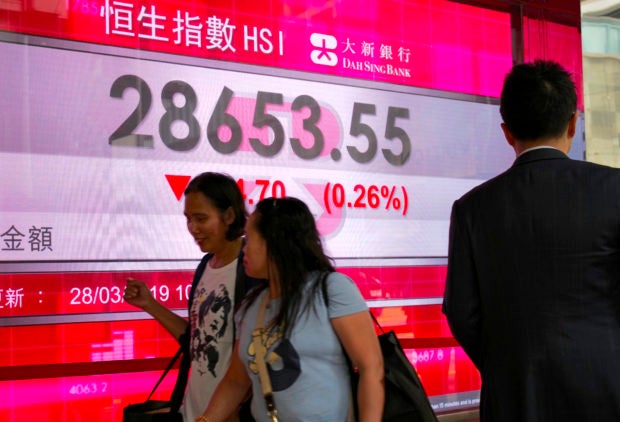 TOKYO – Asian shares were mostly lower on Thursday following a decline on Wall Street, as investors awaited a resumption of trade talks between the U.S. and China.

Shares were mixed in Southeast Asia and fell in Taiwan.

Technology and health care companies drove a broad slide in U.S. stocks Wednesday, erasing some of the market’s solid gains from a day earlier.

The sell-off put the Dow Jones Industrial Average on track to end the month with a loss and marked the second drop for the benchmark S&amp;P 500 index this week.

The yield on the benchmark 10-year Treasury note fell to 2.36 percent, raising some fears about a possible recession within the coming year.

The Trump administration and Chinese officials are about to hold their eighth round of trade talks in Beijing with several tough issues unresolved, including a timetable for lifting tariffs and a way to enforce any agreement.

Many analysts say they expect some limited agreement to be reached in the coming weeks or months. Yet it’s unclear how far any accord would go.