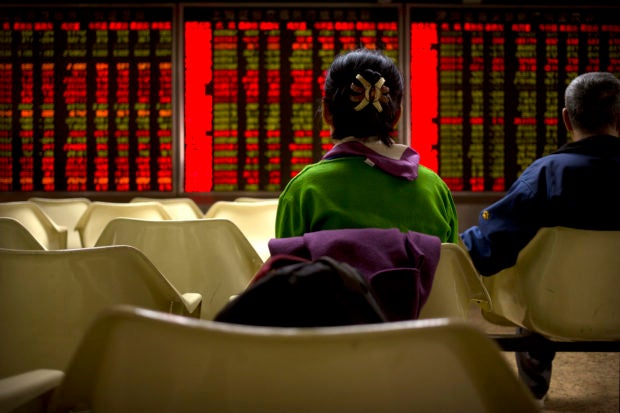 Chinese investors monitor stock prices at a brokerage house in Beijing, Wednesday, March 20, 2019. Markets in Asia are mostly lower after a lackluster day of trading on Wall Street.(AP Photo/Mark Schiefelbein)

BANGKOK — Markets in Asia are mostly lower after a lackluster day of trading on Wall Street.

Shares were higher in Taiwan, Thailand and Indonesia but fell in Singapore.

Investors are looking ahead to the Federal Reserve’s interest rate policy update due later Wednesday. The central bank has signaled that it will be “patient” in raising interest rates.

“Against the backdrop of heightened concerns over U.S.-China trade and ahead of the Fed meeting, Asia markets may well trade cautiously once again,” Jingyi Pan of IG said in a commentary. She added that “the broad sense is that regional markets will be attuned toward the Fed meeting.”

Banks accounted for much of the decline, along with utilities and industrial companies. Those losses offset gains in health care, technology and consumer products stocks.

The Fed has made clear that with a dimmer economic picture in both the United States and globally, it no longer sees the need to keep raising rates as it did four times in 2018.

White House officials said Tuesday that top U.S. trade and economic officials will visit China late next week for another round of negotiations on their dispute over Beijing’s industrial policies and other issues.

ENERGY: Benchmark U.S. crude oil lost 16 cents to $59.13 per barrel in electronic trading on the New York Mercantile Exchange. It gave up 9 cents to close at $59.29 a barrel on Tuesday. Brent crude, the international standard, slipped 3 cents to $67.58 a barrel. /gsg