World stocks rise ahead of vote to push Brexit back 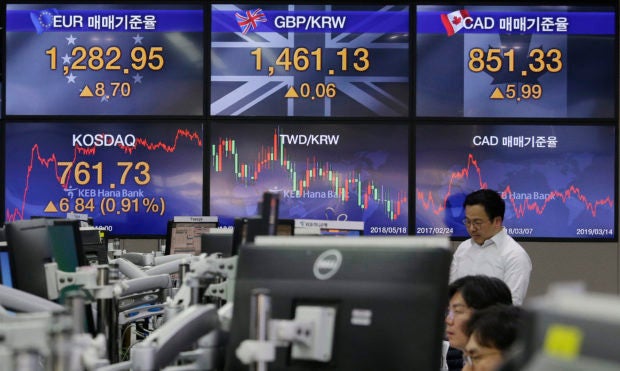 SINGAPORE – World stocks were mostly higher on Thursday as traders awaited a vote that could delay Britain’s March 29 exit from the European Union.

On Wednesday, British lawmakers voted 321-278 to signal that they didn’t want the country to leave the EU without a divorce agreement. The decision was not legally binding, but it spurred gains in the pound. It also triggered a vote to be held later Thursday on whether Britain should delay its March 29 departure from the bloc.

In Asia, stocks wobbled after China said its industrial output grew at the slowest pace in 17 years.

It added 5.3 percent in the first two months of 2019 from the same period last year, official data showed Thursday.

The National Bureau of Statistics combines readings for January and February to account for the Lunar New Year holiday, where many factories and businesses are closed.

“The focus would likely return to economic policies very soon and expectations for the raft of policies announced thus far to help shore up economic performance,” Jingyi Pan of IG said in an interview.

The Shanghai Composite gave up 1.2 percent to 2,990.69. Shares fell Taiwan and Thailand but rose in Indonesia. /gsg