The New Mclaren 720s Spider is presented during the press day at the 89th Geneva International Motor Show in Geneva, Switzerland, Wednesday, March 6, 2019. The Motor Show will open its gates to the public from 7 to 17 March presenting more than 180 exhibitors and more than 100 world and European premieres. (AP Photo/David McHugh)

GENEVA — If you like gawking at breathtaking sports cars with enormous engines, flowing aerodynamics and expensive carbon fiber bodies, then you are in the right place at the Geneva International Motor Show.

If you want to do more than look, however, bring money. Lots and lots of money.

The Geneva show is a traditional showplace for high-end sports cars that offer speeds similar to those of Formula One racers, for prices that start at hundreds of thousands and soar up from there into the millions. It opens to the public at the Palexpo exhibition center on Thursday and runs through March 17.

Here are five of the eye-catching beasts crouching on the show floor:

Simply getting in or out of this two-seat convertible will turn heads thanks to the dihedral doors that swing out and up like giant wings. Even with the top up in the rain, the driver can lower the small rear window in order to savor the roar of the turbocharged 720-horsepower engine that can take the car to 212 mph.

The 720S Spider starts at $282,500 in the United States, but that’s only the beginning for well-heeled customers who wish to pay more for options such as expensive carbon fiber body parts. The version on display in Geneva came in a glowing azure color option dubbed “Belize Blue” by the company, calling to mind a luxury vacation.

This one uses aviation technology to change the car’s aerodynamics and increase the downforce that helps keep it on the road — without adding turbulence and drag. The engine is a hybrid turbocharged V6, with technical details to come later. Only 500 will be built, and the price is around 1 million pounds ($1.3 million). The new car Aston Martin AM-RB003 is presented during the press day at the 89th Geneva International Motor Show in Geneva, Switzerland, Wednesday, March 06, 2019. The Motor Show will open its gates to the public from March 7, presenting more than 180 exhibitors and more than 100 world and European premieres. (Martial Trezzini/Keystone via AP)

Electric motors can deliver sharp acceleration, and the battery-driven Pininfarina Battista takes that to an extreme level — the car can sprint to 100 kps (62 mph) in less than two seconds. Envisioned and produced by Torino, Italy-based design firm Pininfarina, the car is marketed by sister company Automobili Pininfarina, controlled by India’s Mahindra & Mahindra Ltd.

The convertible version of the Huracan from Volkswagen Group’s Lamborghini brand has a 10-cylinder engine and “integrated vehicle dynamics,” with a centralized controller that can anticipate the driver’s intentions by reading steering and gas pedal inputs and adapting the car’s behavior to them. From 220,000 euros ($250,000). 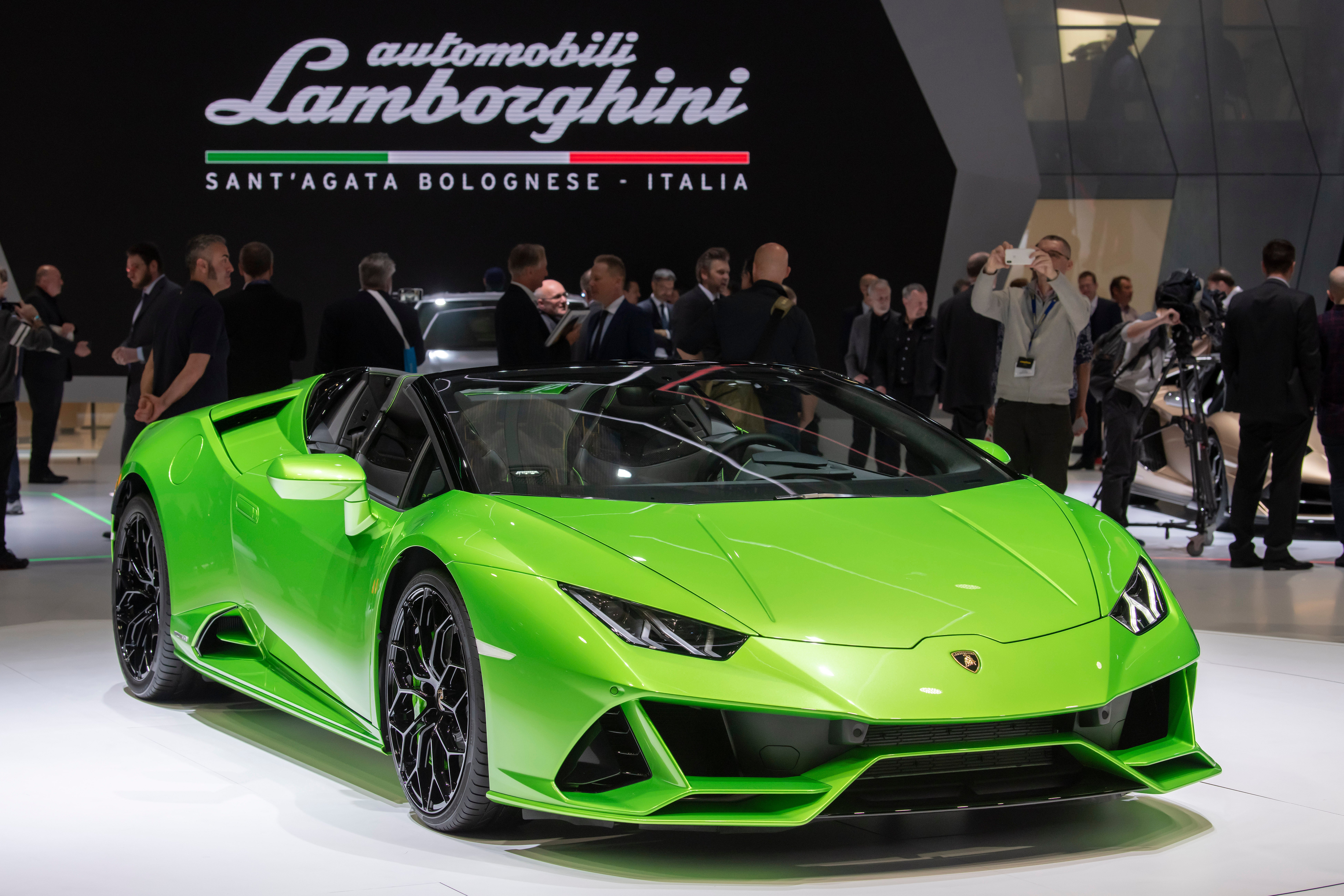 The Lamborghini Huracan EVO Spyder is presented during the press day at the ’89th Geneva International Motor Show’ in Geneva, Switzerland, Tuesday, March 5, 2019. The ‘Geneva International Motor Show’ takes place in Switzerland from March 7 until March 17, 2019. Automakers are rolling out new electric and hybrid models at the show as they get ready to meet tougher emissions requirements in Europe – while not forgetting the profitable and popular SUVs and SUV-like crossovers. (Martial Trezzini/Keystone via AP)

The company is advertising its “most powerful V8 in Ferrari history.” The exhaust system has been designed to make sure the driver and anyone nearby can relish the growl of the 710-horsepower engine, producing “a sound absolutely unique to this particular car.” /kga