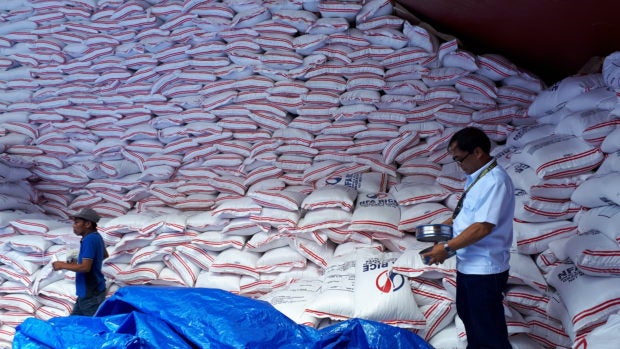 This photo, taken in August 2018, shows Officials of the Bureau of Plant Industry along with the National Food Authority inspecting the sacks of imported rice from Thailand inside MV Emperor 1 docked at the Tabaco City port. Starting on March 3, 2019, the government will start imposing a tariff on imported rice. (Photo by MICHAEL B. JAUCIAN / Inquirer Southern Luzon)

MANILA, Philippines–Government funding for the country’s rice industry is seen to hit a record of P22 billion this year with the implementation of the Rice Import Liberalization Law, the agriculture chief said.

In an interview with reporters on Monday, Agriculture Secretary Emmanuel Piñol said that with funding from the national government along with the agency’s budget for the sector, “the rice industry will be given the biggest budget in history.”

This is on top of the annual P10-billion subsidy under the Rice Competitiveness Enhancement Fund, which aims to cut the cost of producing rice so local farmers may be able to compete with the influx of more affordable imported rice.

DA has also allocated P7 billion of its funds to rice.

In total, the rice industry will get P32 billion for its development.

“This is actually the greatest irony,” the secretary said. “Farmers are worried with the implementation of this measure but it’s also now that they will be getting this kind of financial assistance.”

The measure, which is expected to be implemented today, removes the regulatory and importing function of the National Food Authority and allows the expansion of the private sector’s role in the market. Shipments would be charged tariffs between 35 percent to 50 percent, which would be used for the industry’s modernization.

Economic managers said the law could cut retail rice prices in half and ease inflation by 0.5 to 0.7 percent.

During the DA’s nationwide consultation with industry stakeholders last week, Piñol said farmers only wanted assurance from the government that the unimpeded entry of imported rice would not pull farm-gate prices of palay down.

Last year, the farm-gate price of palay reached its highest at P24 a kilogram, but following speculation that imported rice will flood the market, prices in some provinces dipped to P15 a kilo.

But according to Piñol and officials from socioeconomic planning agency National Economic and Development Authority, such worry is misplaced.

Piñol admitted that the government’s intervention should have been implemented as early as last year, but bureaucratic processes have been derailing the budget’s release.

This is the reason why government agencies are scrambling to complete the law’s implementing rules and regulations (IRR). Piñol said the IRR will be ready today.

“There are calls from other industry stakeholders that the formulation of the IRR should be extended but I’m against that. The longer we wait, the longer it will take for the budget to be released. That’s one planting season lost for us,” he said.

The IRR tackles the details of the law, including the government’s safety nets for local farmers who may be affected by the industry’s liberalization. It will also explain in detail the importation process and the transition of various agencies to the new rice regime. /jpv

DOJ: No retraction of testimony vs De Lima