Peso up over reports of progress in Euro debt talks, China’s strong growth 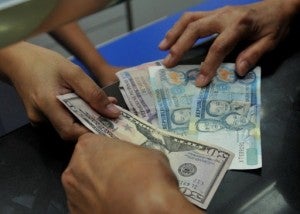 MANILA, Philippines—The peso inched up on the first trading day of the week as discussions by European policymakers on how to resolve the debt crisis in the eurozone deepened, and as China showed signs of sustained strong growth.

Over the weekend, European leaders began a new round of talks on how to solve the debt crisis. This is the 13th summit on crisis management over the last 21 months.

The leaders are expected on Wednesday to unveil the concrete plans they will have agreed upon.

Traders said the talks somewhat made the financial markets still hopeful that there would be a favorable ending to the saga on the eurozone debt crisis. This prompted some investors to purchase emerging market securities, including those from the Philippines, thereby lifting the peso and some other Asian currencies.

Moreover, China is expected to report soon that its manufacturing sector grew in October, thus providing evidence it is nowhere near slowing down amid years of robust growth.

Traders said the favorable economic indicators for China, including manufacturing output, have made investors believe growth in the Asia-Pacific region would remain favorable. This is because China is becoming a bigger and bigger export market for its neighbors like the Philippines, thereby boosting their incomes.