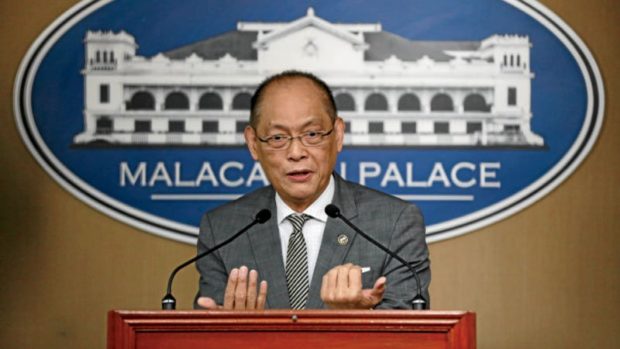 In a text message, Medialdea said Diokno’s appointment was announced during the 35th Cabinet meeting in Malacañang.

In a text message, Diokno said he only learned his appointment at 7 p.m. on Monday. He said he would immediately assume his post on Tuesday.

“We thank Secretary Diokno for his services to the nation and to this Administration as Secretary of Budget and Management, a position he similarly held under the Estrada Presidency,” Panelo said.

He said the Palace would expect “incoming Governor Diokno to spearhead reform initiatives that will align the financial institution’s operations with international best practices and improve its corporate viability, among others, in line with Republic Act No. 11211, which was signed into law by President Duterte just last February 14. “

“We wish Sec. Diokno all the best in his endeavors as the new chief of the country’s central monetary authority,” he added. “With him at the helm of the Bangko Sentral ng Pilipinas, our banking institutions are in good and competent hands.”

He said the budget chief “knows the inner workings of government and industry, and has repeatedly demonstrated the ability to run a large, complex organization with intellectual leadership and a steady hand.”

All of these, he said, would “contribute to his successful stewardship of the Bangko Sentral ng Pilipinas as its next Governor and Chairman of the Monetary Board.”

“His competence is unquestionable, owing to his deep expertise in macroeconomics and extensive senior management experience in government and the private sector,” he said.