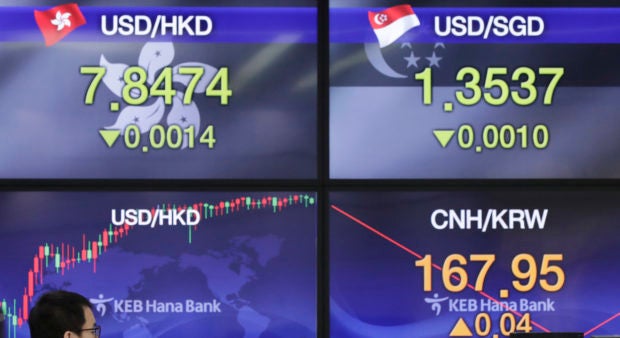 A currency trader walks near the screens showing the foreign exchange rates at the foreign exchange dealing room in Seoul, South Korea, Monday, March 4, 2019. Asian stocks rose Monday after news reports said Washington and Beijing are close to reaching an agreement as early as this month to end their costly tariff war. (AP Photo/Lee Jin-man)

BEIJING  — Asian stocks rose Monday after news reports said Washington and Beijing are close to reaching an agreement as early as this month to end their costly tariff war.

Benchmarks in Shanghai, Tokyo and Seoul advanced after Bloomberg News and The Wall Street Journal, citing unidentified sources, said China was offering to ease tariffs and other restrictions on U.S. farm, chemical, auto and other products. They said Washington would remove most sanctions on Chinese imports.

A deal might be completed in time to be signed by Presidents Donald Trump and Xi Jinping this month, the reports said. But they cautioned the two sides still were negotiating on the issue that sparked the dispute: Chinese plans for state-led creation of global technology competitors that Washington, Europe and other trading partners say violate Beijing’s market-opening obligations.

The battle between the two biggest global economies has rattled global financial markets for months. Investors worry it will weigh on global economic growth that already is showing signs of slowing.

“Speculation that both the U.S. and China are close to signing a deal will keep market players slightly upbeat,” Nicholas Mapa and Prakash Sakpal of ING said in a report.

The legislature is due to endorse a law that would address one portion of foreign complaints about Beijing’s regulation system by discouraging officials from pressuring companies to hand over technology.

Forecasters expect the government to announce an annual growth target of at least 6 percent. Few major changes are expected, but economists expect more government spending to shore up cooling growth.