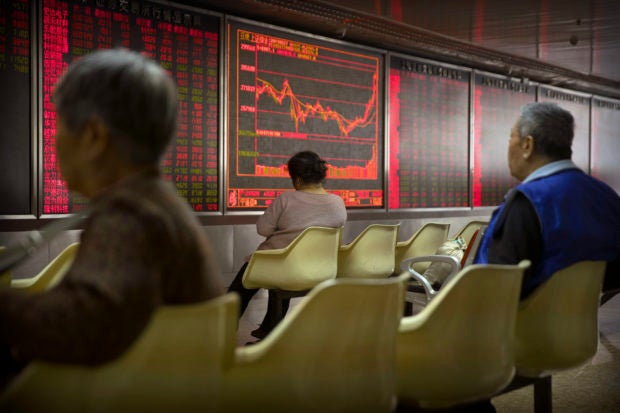 Britain’s FTSE 100 lost 0.5 percent to 7,118.99 after Prime Minister Theresa May on Tuesday gave lawmakers the power to slam on the brakes and divert Britain away from a disruptive and chaotic exit from the European Union.

Kim and Trump were due to have a private dinner Wednesday evening, following up on their Singapore summit in June, which was long on pageantry but short on any enforceable agreements for North Korea to give up its nuclear arsenal.

Progress toward further dismantling of the North’s nuclear program could help reduce tensions left over from the 1950-53 Korean War, dousing a longtime flashpoint in the region.

But the event was absorbing less attention than the first meeting, said Jasper Lawler of London Capital Group.

“Traders will keep an eye on developments, but the intensity of the focus will be nothing like the first meeting which came following months of hot-headed comments from both sides,” Lawler said in a research note.

Pakistan said its air force shot down two Indian warplanes after they crossed the boundary in the disputed region of Kashmir and captured two Indian pilots, as Pakistan’s Civil Aviation Authority closed the country’s air space to all commercial flights.

ELSEWHERE IN ASIA: Hong Kong’s Hang Seng erased earlier gains to slip nearly 0.2 percent to 28,727.36, while the Shanghai Composite index gained 0.4 percent to 2,953.82. Shares fell in Singapore and Taiwan but rose in Thailand.

ENERGY: U.S. benchmark crude added 61 cents to $56.11 a barrel in electronic trading on the New York Mercantile Exchange. It was essentially flat at $55.50 a barrel in New York overnight. Brent crude, used to price international oils, gained 44 cents to $65.80 a barrel.