World shares fall back as rally from US tariffs delay fades 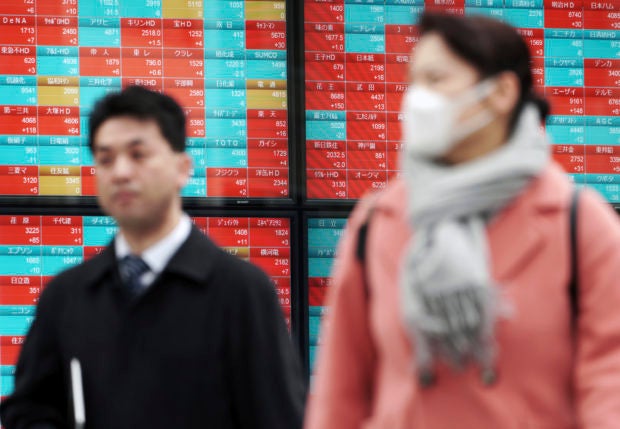 A man and a woman walk past an electronic stock board showing Japan’s Nikkei 225 index at a securities firm in Tokyo Tuesday, Feb. 26, 2019. Most Asian share benchmarks are lower as a rally spurred by the Trump administration’s decision to hold off on increasing tariffs on imported Chinese goods fades. (AP Photo/Eugene Hoshiko)

BANGKOK – Shares declined Tuesday, backtracking from Monday’s rally spurred by news that President Donald Trump had pushed back a deadline for raising tariffs on imports from China to allow time for more negotiations.

Britain’s FTSE 100 lost 0.9 percent in early trading to 7,121.64 after Prime Minister Theresa May returned from a seemingly unproductive meeting with European Union leaders Monday to a growing attempt by British lawmakers to stop her from taking Britain out of the EU on March 29 without a divorce deal.

Tuesday’s declines reflected waning confidence in negotiations between the U.S. and China over Washington’s complaints that Beijing steals technology or pressures companies to hand it over.

The Trump administration’s decision to hold off on a March 2 increase in punitive duties on $200 billion worth of Chinese spurred buying Monday.

But many questions remain about the prospects for a deal that would unwind the tariffs already slapped by both sides on billions of dollars of each other’s goods.

Trump’s conflicting comments on the status of the talks have added to the uncertainty, said Jingyi Pan of IG.

“As it is, we continue to view the trade matter through an opaque screen and make assumptions from the shadows of President Donald Trump,” Pan said in a commentary.

ENERGY: U.S. crude oil gave up 8 cents to $55.40 per barrel in electronic trading on the New York Mercantile Exchange. It lost 3.1 percent to settle at $55.48 a barrel in New York after Trump criticized rising oil prices in an early morning tweet. Brent crude rebounded, gaining 14 cents to $64.90 per barrel.