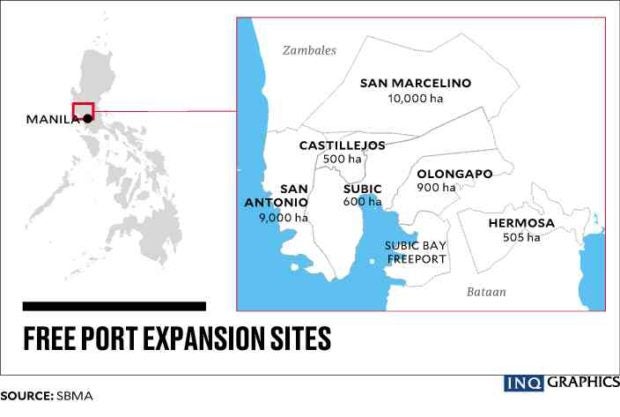 CLARK FREEPORT — Although the national government has spent 26 years on turning two major US military bases into free ports, lawmakers want to expand these by adding 41,605 hectares to the Subic Bay Freeport and another 35,000 ha to the Clark Freeport.

The expansion of the two free ports — Subic in Bataan and Zambales provinces, and Clark in Pampanga and Tarlac provinces — is proposed in Senate Bill No. 2207 by Senators Richard Gordon, Bam Aquino and Sonny Angara.

The amendments to Republic Act No. 7227 creating the Bases Conversion and Development Authority (BCDA) began from House Bill No. 8270 initiated by Speaker Gloria Macapagal-Arroyo and Bataan Rep. Geraldine Roman.

The Senate version, contained in committee report No. 563 dated Feb. 4, sought to revitalize the government’s bases conversion and development program.

Gordon, former chair and administrator of the Subic Bay Metropolitan Authority (SBMA), said the bill sought to “spread the blessings” of the free port.

Employment is four times bigger than during the heydays when Subic was home to the US Pacific Fleet and Clark was the headquarters of the 13th US Air Force.

At least 505 ha at Hermosa town in Bataan province are also being considered in the expansion.

Previously, the 365-ha Philippine Refugee Processing Center Complex and the Morong Special Economic Zone were annexed to Subic freeport through Proclamation No. 984.

Proclamation No. 805 annexed 5,724 ha from Mabalacat City in Pampanga and Bamban town in Tarlac.

These were all done during the term of former President Fidel Ramos.

The SBMA said it was supporting the bill because while Subic freeport, first developed by the Spanish Navy, had 64,000 ha, it was mostly forests and sea.

“Only 11,000 ha could be developed and much of it had been developed,” Eisma said.

Clark, a grazing ground for horses of the US Cavalry, consists of 4,400 ha, and 2,300 ha of these are devoted for what is now Clark International Airport.

Local governments have yet to submit their position papers to the Senate. Their local councils are required to pass ordinances making their territory or part of it extended free ports.

Under the bills, the SBMA and Clark Development Corp. as well as local governments will have greater say in how things are run in the free ports, without excluding national agencies.

In lieu of taxes, locators will pay 5 percent on gross income earned. In Subic Bay Freeport, 2 percent will go to the national government, 1 percent to the
SBMA, and 2 percent to the SBMA for distribution to local governments according to sizes of population, lands and equal sharing.