Benedict Sison is not one to run away from challenges
By: Doris Dumlao-Abadilla - Reporter / @philbizwatcher
Philippine Daily Inquirer / 05:03 AM February 25, 2019 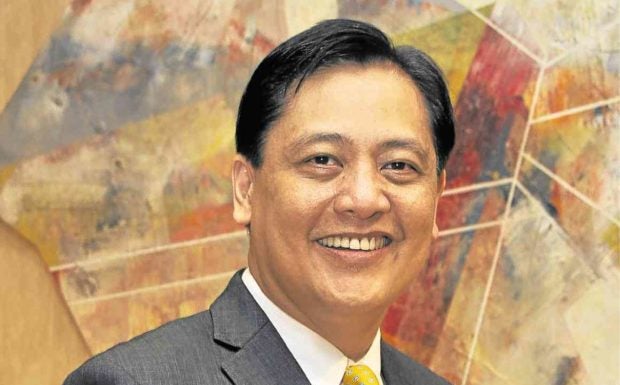 He had wanted to be a priest, but it turned out that his real calling was to become a corporate leader across various territories, marry the woman of his dreams and see the world.

Benedict Sison, the new chief executive officer of Sun Life Financial Philippines Inc., honed his skills in corporate finance and business management during his many years as an expat, mainly in the fast-moving consumer goods (FMCG) industry.

After becoming a certified public accountant and finishing his MBA in the United States, he took on leadership roles in the United States, India, Canada and China, after which he found an opportunity to return to the Philippines and join insurance giant Sun Life of Canada, initially as chief financial officer (CFO), in 2010.

Sison now leads a 14,000-strong agency force that aims to deliver five million clients by the end of 2020.

The group is on track to meet what seemed an ambitious target set in 2015, when Sun Life’s local client base stood at only 1.5 million.

Beyond 2020, he’s the guy tasked to cement Sun Life’s market leadership and lead it to its next phase of growth in the Philippines.

Sison came from a big family, the 12th in a brood of 14 children. “Cheaper by the dozen,” Sison says in jest, during an interview with the Inquirer. With such a big family, his wasn’t always a life of comfort, he recalls.

“We had our share of financial challenges,” he says.

But Sison and his siblings made it through the university and became successful in their respective careers.

“Of course, it helped that some of us had scholarships. Thanks to the value of hard work, drive, and determination that our parents instilled in us, we never allowed any difficulty to stand in the way of our objectives. We always believed it can be done,” he says.

Along the way, he took a slight detour and entered the seminary. On his second year there, he was allowed to complete his degree in UP.

By the time he graduated in 1983, he discerned that a religious life was not really his calling.

Nonetheless, his two-year experience as a seminarian has had a halo effect.

It taught him to be more tolerant, open-minded and compassionate to people from all walks of life.

“As they say, 80 percent of the success in any job is based on your ability to relate with people. My new role requires me to influence people just about all the time.  I try to win their support, inspire them to perform better, persuade them to become my champions, engage their imagination to ideate creative solutions, build new relationships, etc..  I am able to more easily influence people because of the empathy that being in the seminary developed in me,” he says.

“Being able to successfully influence people, in turn, makes my job easier. I am able to multiply myself through the many people I influence. Being in the seminary also helped me develop good interpersonal and communication skills.  It helped me understand myself, understand problem situations, and the impact my decisions have on others.  And all of these are also skills that I need to influence others and move things forward,” he adds.

After graduating from UP, Sison joined the faculty of the UP College of Business Administration as a junior instructor.

His mentor, Emmanuel Soriano (former UP president), invited him to join his consultancy firm EVSA Corp. as a research assistant, paving the way for him to bag a teaching assistant post at the University of California, where he simultaneously pursued his MBA. He took the CPA exam in the United States, passed, and became a member of the American Institute of Certified Public Accountants.

After finishing his US studies, Sison joined ConAgra Brands, the second largest food manufacturing company in the United States at that time.

He started out doing internal audit in California, moving to Minneapolis, Minnesota, to become the finance manager for the commodities trading business and afterwards joined the global headquarters in Omaha, Nebraska to lead the international implementation of Oracle General Ledger.

He took on his first international assignment in 2000 as the ConAgra’s CFO in India.

This was designated then as a “hardship” post, but for Sison’s wife Candy—who was his classmate in UP—this was his best overseas posting.

“That India experience allowed me not only the chance to hone my financial skills, but also to learn firsthand the art of business partnering as a key asset in successfully running a business. When I arrived in India, it became clear to me that the company was highly leveraged, poorly managed and needed to strengthen internal controls. It had three years of losses and was challenged with several legal/tax issues. Introducing changes for the better was a huge challenge,” Sison says.

“I realized that when you turn around a company, you do not simply implement decisions based solely on your research and experience. You have to empower cross-functional teams to generate their own ideas and solutions for successful implementation. This allowed employees to take ownership of the changes and turn around. When I completed my three-year assignment, the company was starting to become profitable and grow aggressively,” he adds.

After India, he was posted in Toronto, Canada, as the international controller covering ConAgra’s operations in 38 countries including Canada, Mexico, the Caribbean, United Kingdom, India, Philippines, Japan, and China.

After three years in Toronto, he was posted for four years in Shanghai.

Sison did a lot of travelling for work and leisure as an expat and his wife supported him all throughout, giving up her own career when they moved to India.

“Our passion as a couple is to travel. We would like to visit at least 100 countries in our lifetime,” he says. As of last year, they have already visited 77 countries, reaching even exotic territories like Easter Island.

After spending 10 years overseas, ConAgra wanted to repatriate Sison to the United States for “refuelling”—to be reimmersed into the company’s culture and vision-mission—as is common practice among multinational corporations and multilateral institutions.

But that was 2010, when Asia was booming and Sison wanted to stay in this part of the world.

He thus left the FMCG industry and joined Sun Life as country CFO in the Philippines.

“What really brought me to Sun Life was the promise of bigger challenges,” Sison says, noting that when he joined the insurance giant, it wasn’t the market leader in the Philippines yet.

“I felt that joining the financial services industry was a different challenge altogether. It entailed offering intangible products in a market where financial literacy was still developing. And even with my finance background, the sophistication of financials in an insurance business presented a good opportunity for personal growth,” he says.

In Sun Life, Sison was exposed to various challenging environments. As CFO for the Philippines, he was given the additional responsibility of overseeing the actuarial department, an area where he had zero knowledge.

He deemed himself fortunate for having been mentored by an exemplary actuary, Sachi Pang, who gave him volumes of materials to study in the evening and through the weekends.

After two years as country CFO, he moved to Hong Kong to take on the role of Asia CFO.

There, he held finance responsibility over seven countries, putting to the test his leadership and people skills.

When Sison came back to the Philippines, Sun Life created a new role for him as chief strategy and financial management officer.

On hindsight, he was probably already being groomed to be the next country CEO.

When Sun Life unveiled its “Rise PH” program with the goal of reaching five million clients by 2020, this program had three pillars: strengthening distribution, growing the institutional business and penetrating the middle market.

Sison’s predecessor, Riza Mantaring, put him in charge of penetrating the middle market, which Sun Life calls the C2 market.

Sison initially thought this was a herculean task as Sun Life had attempted to penetrate the middle market several times in previous years but wasn’t successful.

But he isn’t one to say no to challenges.

In the past, Sun Life attempted to sell insurance cards in retail stores.  This failed because there seemed to be no connection between the product (insurance) and the channel, so the typical customer did not find product relevance at the point of purchase.

Also, the distributor did not have the motivation nor the ability (information, confidence, skill, time, etc.) to push the products.

The lesson here is to know your customer better and how best to target them: make the product offering relevant to the customer as well as worthwhile to the distributor, Sison says.

Sun Life had also tried to partner with an organization as a tactical effort to reach a specific client segment, but this project failed because the company’s motivation did not align with the partner’s, and they were not willing to take on additional administrative tasks to make it work.

From hereon, Sun Life learned that partnering with the right organization is just as important as the value proposition.

“The partner needs to align with our vision, and must have the capability to reinforce our messages, and must be willing to facilitate some of the administrative work. Chose the right partner, and establish a dedicated organization,” Sison says.

Sun Life had also opened brick-and-mortar stores in shopping malls in the past.

This failed because middle-income clients would visit the malls to relax, enjoy and spend and were not there with their family to even consider saving or investing.

The lesson: know your customers better and where they are predisposed to think finance. Equip staff sufficiently about financial services. Review execution versus plans.

Sison expects to do more of that as he guides Sun Life here to an even brighter future.