Trump threatens tariffs on EU if no trade deal reached 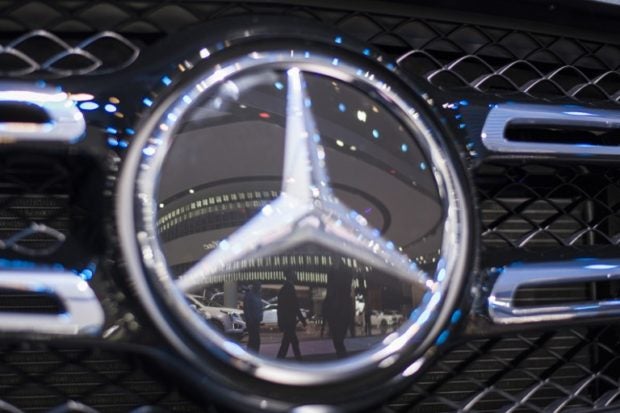 In this file photo taken on January 16, 2018, people are reflected on a Mercedes-Benz car during the press preview at the 2018 North American International Auto Show (NAIAS) in Detroit, Michigan. – The White House received February 18, 2019, a Commerce Department report on the auto industry that could trigger tariffs against imported cars and intensify tensions with Europe. German Chancellor Angela Merkel has labeled as “frightening” the prospect that European car imports could be declared a national security threat to the United States. Two people familiar with the matter earlier told AFP that the Commerce Department report has concluded that auto imports pose such a threat. AFP

WASHINGTON, United States – US President Donald Trump threatened Wednesday to impose tariffs on European auto imports if he is unable to strike a trade deal with the EU.

“We’re negotiating. If we don’t make the deal, we’ll do that,” Trump told reporters in response to a question on new tariffs.

Trump’s renewed threat against the EU auto industry takes on a new edge as it came two days after the Commerce Department delivered a report that sources said found European car imports constitute a national security threat to the United States.

The report could set the stage for the White House to impose tariffs within 90 days, a move Brussels has vowed to parry with its own set of tariffs. The US already has used the national security argument to slap duties on steel and aluminum imports.

In one of many aggressive trade moves, Trump, who said he favors tariffs, has threatened 25 percent duties on European autos, especially targeting Germany, which he says has harmed the American car industry.

Trump reached a truce with the EU following a meeting last July with European Commission President Jean-Claude Juncker, but on Wednesday expressed frustration with the state of talks.

“We’re trying to make a deal,” Trump said. “They’re very tough to make a deal with, the EU. They’ve been very difficult over a period of time, over many, many years.”

The White House also locked in tough high-stakes negotiations with China to find a way to resolve the conflict that saw steep tariffs exchanged between Beijing and Washington. /cbb