Back to black: Cathay says it has ended two years of losses 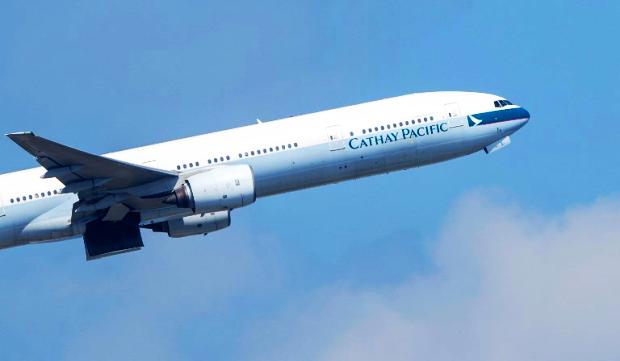 This photo, taken on Oct. 22, 2018, shows a Cathay Pacific passenger jet taking off from Hong Kong International Airport. Cathay Pacific said on Wednesday, Feb. 20, 2019, that it was expected to swing back to profit ending two years of annual losses as it battles lower-cost Chinese carriers and Middle East rivals. (Photo by ANTHONY WALLACE / AFP)

Hong Kong — Hong Kong flag carrier Cathay Pacific said on Wednesday it was expected to have swung back to profit in 2018, ending two successive losses as it embarked on a massive overhaul.

The recovery also came in a year that saw it suffer an embarrassing data breach that dented its reputation and could prove costly.

The airline said it expected to record a consolidated profit of around $293 million for 2018, compared with $160 million losses the year before, according to a preliminary profit alert.

The company’s share price jumped more than seven percent after the announcement as investors took comfort in the turnaround after two grim years for Asia’s largest carrier.

“In 2018, the passenger business benefited from capacity growth, a focus on customer service and improved revenue management,” the company said in a statement, adding its cargo sector was also “strong.”

Cathay has been overhauling its business after posting its first losses in eight years in 2016, firing more than 600 workers and paring overseas offices and crew stations as it faced stiff competition from budget rivals on the mainland.

It also added international routes and better services on board its flights in a bid to compete with well-heeled Middle Eastern long-distance carriers.

The profit alert suggests those moves have paid off.

The airline narrowed its losses to $33.5 million for the first half of 2018 — a tenth of what their losses were for the same period in 2017. But the second half of the year appears to have brought Cathay squarely back into the black.

Dickie Wong, an analyst with Kingston Securities, said Cathay is expected to further benefit from the end this year of costly fuel-hedging contracts.

“I would say the unfavorable impact to Cathay would continue to reduce,” he told AFP.

Wong said the introduction of premium economy had attracted new customers while ticket discounts helped it compete against budget carriers. But he said the company still had “much room to improve in their luxury classes” if it wants to take on Middle Eastern rivals.

Cathay will announce its full-year result next month.

But the year was not without trouble.

In October it sparked outrage when it admitted to a massive breach five months after hackers made off with the data of 9.4 million customers, including some passport numbers and credit card details.

The airline faces potentially steep payouts in Europe, which boasts strong protection laws and financial penalties for companies that do not swiftly own up to data breaches.

British-based law firm SPG Law has already launched a group action against the carrier over the breach to help customers seek compensation.

This year Cathay’s website mistakenly offered first and business class flights for a fraction of their value in two high-profile and costly blunders. /atm