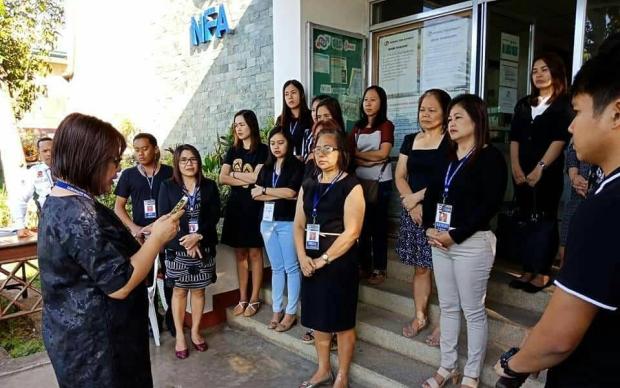 TAGBILARAN CITY, Bohol — At least 30 employees of the National Food Authority (NFA)-Bohol wore something black on Monday to protest a new law that removes import limits on rice and strips off the agency’s regulatory powers.

She said Monday was a “day of mourning for the death of the rice industry in the Philippines.”

“It’s the beginning of the end of the rice industry in the Philippines,” Evasco said. “This law stripped the NFA of its regulatory and stabilization functions. We are just reduced to a mere buffer stocking agency.”

Evasco said the law would affect many farmers, small grains retailers, and consumers who rely on NFA for support, livelihood, affordable rice, food safety, food security, and order in the grains industry.

“The law allows anyone to import rice at any volume as long as they pay the 35 percent tariff. There is no longer a limit on rice importation which will definitely hurt our palay farmers,” Evasco said. “There will be no price monitoring and control as NFA rice will no longer be available through accredited retailers.”

Evasco, however, said that the possible effects of the newly-signed rice tariffication law among farmers in the province would not be felt immediately.

Bohol, considered as the rice bowl in Central Visayas, was expecting harvest season in March when Boholano consumers would buy newly-harvested palay — that is, unhusked rice — at P22 pesos per kilo and commercial rice.

Evasco said the government’s subsidized rice of 32,000 sacks arrived in Bohol two weeks ago. Some bags would be kept for emergencies.

“We will no longer sell the P27 per kilo NFA rice once our inventories will be depleted by August this year,” Evasco said.

Consumers then will have to buy expensive commercial rice, she said.

In a statement, the Kilusang Magbubukid ng Pilipinas (KMP) said President Rodrigo Duterte’s signature on the reviled Rice Tariffication Act would pave the way for unbridled rice importation and increasing rice prices would be equivalent to a death sentence for the local rice industry and rice farmers.

“Rice tariffication will only push the country to unprecedented hunger. Our decades of experience under the World Trade Organization proved that rice importation policy was never a guarantee of sufficient rice supply and lower rice prices,” Ramos added.

“Duterte has no hint of compassion towards Filipino farmers and the poor people with his string of anti-people policies. Last year he enacted the TRAIN Law, today, he signed the rice tariffication despite the strong calls for a veto of the bill,” Ramos added. /atm