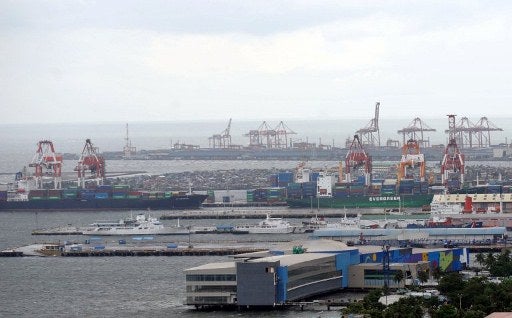 An overview of cranes loading ships with containers at the Manila South Harbor port taken in 2009. More imports and fewer exports have resulted in a record trade deficit in 2018, the PSA confirmed on Tuesday, Feb. 12, 2019. AFP FILE

MANILA, Philippines — The Philippines posted a record trade deficit of $41.44 billion in 2018 as imports climbed while exports dropped last year.

National Statistician Lisa Grace S. Bersales confirmed to the Inquirer that the trade-in-goods deficit posted in 2018 was the biggest in Philippine history.

Preliminary Philippine Statistics Authority (PSA) data released Tuesday showed that the trade deficit continued to widen from $26.702 billion in 2016 and $27.38 billion in 2017.

The wider trade deficit resulted in a ballooning current account deficit as more dollars were being spent for importation.

The current account deficit, in turn, was putting pressure on the peso, which weakened to 12-year lows last year.

Last December, the Bangko Sentral ng Pilipinas (BSP) said the current account was projected to end 2018 at a $6.4-billion deficit, or over twice larger than the previous projection of $3.1 billion.

The current account deficit was seen further increasing to $8.4 billion in 2019.

Economic managers had said that with the Duterte administration’s ambitious “Build, Build, Build” infrastructure program, demand for imports of mostly capital goods would remain robust during the near term.

“A widening current account balance due to rising capital goods imports and anemic exports growth is a cause for concern. The widening gap emphasizes the need to reform legislation to allow foreign investments in firms catering to the domestic market, in addition to expanding their exporting activities,” according to Pernia, who heads the state planning agency National Economic and Development Authority (Neda). /cbb