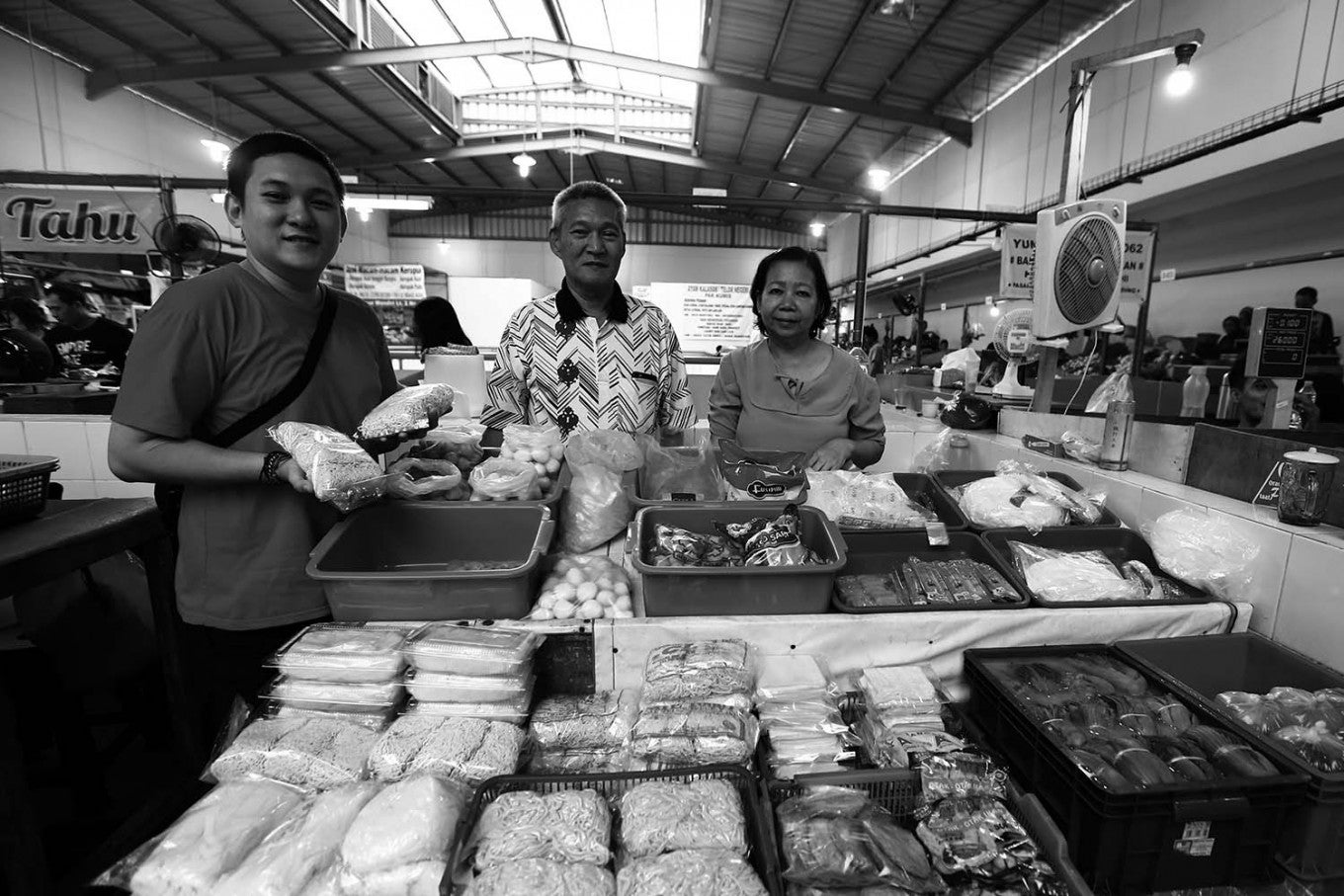 JAKARTA — A typical morning for Donal Wikarta, 32, a grocer in the Mandiri Summarecon Kelapa Gading Market, starts as early as 3:30 a.m.

Donal drives from his residence in Bekasi to Senen Market to buy from suppliers and continues on to Kelapa Gading to prepare for when his market opens at 6 a.m. In his stall, Donal sells a variety of Chinese foods ranging from kwetiau (flat rice noodles), noodles, meatballs and fish balls to springroll sheets.

“I prepare everything before the market opens at six o’clock and stay here until 11:30 a.m. every day,” Donal told The Jakarta Post on Jan. 21 at his shop.

Born into a Chinese-Indonesian family, Donal has been working in the family business since he was still in junior high school. “They have been taking me to the market to help out since I was small. Usually, I tagged along every weekend. This went on until I graduated from university. Saturdays and Sundays were market days for me,” said Donal with a laugh.

Bambang Winardi, 68, Donal’s father, said Donal’s involvement started naturally, “I had been taking him to the market with the intention of teaching him how to sell.”

Having deep roots already in Indonesia, Bambang and his wife Rohana, 64, both came from families of traders. “My family hails from Surabaya and Surakarta; our business was textile trading,” said Bambang, whose family didn’t have any problem with him deciding to work as a cassette salesman, which eventually led him to be a mastering engineer at Aquarius, one of Indonesia’s top music recording companies.

Meanwhile, Rohana came from Bandung and had relatives in Bogor who started a noodle- and meatball-selling business. “Donal’s business acumen came from me,” she said.

It wasn’t until Donal’s birth that Bambang quit his engineering job to become a full-time grocer.

Like his father, Donal had a taste of the corporate life after university, where he majored in finance, but he soon decided to join the family business, encouraged by his father. “I worked at a public relations agency about five years ago, until Dad asked me to leave it and join the family business full-time. It was a hard decision for me, as I liked my job, but I also wanted to help out in the market because at that time Dad was sick,” Donal said.

Bambang said he wanted Donal to stop working and help out in their shop, “I did ask him to stop working because I think it’s just not worth it to go on a job that paid so little, while I had a business that was thriving at the time.”

As the youngest of three, Donal is now making the calls and managing his family’s shop at the market. His elder sister lives in the United States, working as a chef, while his older brother takes turns with him in the shop.

Bambang’s proud look when watching his son interacting with customers is written all over his face.

“Donal is getting good at selling and serving customers. Sometimes he still loses his temper, but I think it’s because he’s still young,” he beamed, watching from a distance as Donal chats with an elderly woman who seemed like a longtime regular customer of the shop.

Bambang instills the value of being patient when running the business into his son. “I always tell him to be patient with everything. In dealing with customers, we have always to be nice, although there are customers who are not really nice,” said Bambang. “I also tell him always to be patient when business is not so good. We’re not doing as great as a few years ago, but we survive because we persevere.”

Rohana, on the other hand, prefers to lead by example. “I let Donal watch me whenever I work.”

Aside from perfecting his tricks of the trade, Donal has made innovations to the business. “I sell some goods via social media, so when we close shop, in the afternoon I sometimes deliver people’s orders,” he said.

Donal did try doing a business of his own and has dreams to start other businesses, but for now, he chooses to tend to the family shop. “I do want to start my own business, but it will be selling these things as well because I know the game already. I tried setting up a roti bakar [toast] business before, but it didn’t work out so I returned here.”

Donal’s conscious decision to continue the family business meant he had to be fully committed, although as a millennial he had to overcome challenges when people asked him about his occupation. “Honestly, there were times when I was embarrassed telling people about my job. It was embarrassing to say that I am a grocer in a market, but I snapped out of it and realized that this is a family business that my parents started more than 30 years ago and I have to be proud of it — and I am,” he said.

Things may seem to be going swimmingly with Donal taking care of the family business, but there is one thing that still bothers Bambang. Like most Chinese-Indonesian parents, he laments about Donal being single. “I want him to find a wife. Get married: ideally to a Chinese girl, but I’m also OK if she’s not Chinese. As long as they share the same faith,” he said.

Donal laughed when asked about what he wants in a wife and his answer is a simple one: “As long as she’s OK helping me out in the market every day, it’s fine with me.”