At 10 hrs, 2 mins a day, Filipinos spend most time online 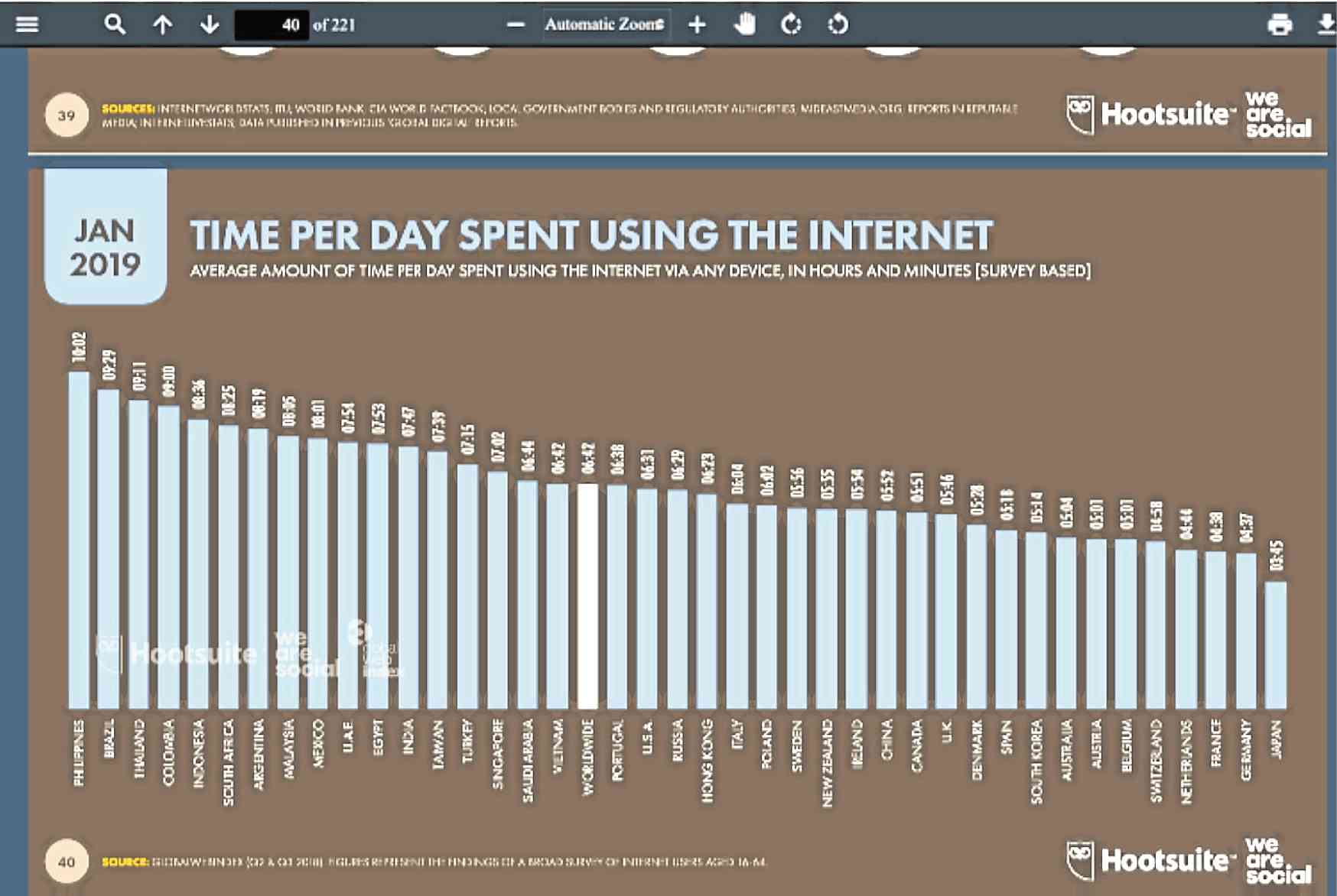 Whether it’s for work, education, entertainment, e-commerce, social media or a combination of all these—and despite much slower connectivity compared to other territories—nobody can beat Filipinos in terms of internet usage.

Filipino internet users typically spend around 10 hours and two minutes of their waking life each day online, dethroning the Thais as the heaviest internet users, based on the Digital 2019 report of social media management firm Hootsuite and creative agency We Are Social.

Filipinos are also the world’s most voracious users of social media, spending around four hours and 12 minutes on various social media platforms every day.

Based on the latest report, internet users in the Philippines raised their average daily time online from nine hours and 29 minutes last year.

“Asia is one of the world’s fastest-growing regions for internet and mobile usage, and with that comes a huge appetite for technological adoption, foreign investment and digital innovation. Brands and companies are recognizing this opportunity and demonstrating a strong sense of urgency to integrate digital and social media into their business,” said Roger Graham, Hootsuite’s head of Asia.

Other heavy users of the internet are Brazil, Thailand and Colombia, where the citizens are online an average of over nine hours every day.

The research suggested that a digital and social media strategy was imperative, especially as 70 percent of internet users in the country spend money on e-commerce platforms.

Mobile internet is becoming increasingly popular as a method of accessing the internet in the Philippines, where users spend around four hours and 58 minutes on mobile internet, the second highest globally behind Thailand.

Social media users who use mobile internet in the Philippines are estimated at 10 million, up by 16 percent from last year.

The eighth annual Digital report—which examines digital trends and social media use across 230 countries and territories—said that more than one million new people were going online every day, and that 45 percent of the global population—nearly 3.5 billion people annually—were logging into social platforms.

This marked a 9-percent increase year-over-year despite growing concerns over fake news, fake followers and data privacy in 2018.

“Although social media came under increased scrutiny and saw diminished trust among users in 2018, people around the world are spending more time on social—the global daily average is now two hours and 16 minutes, or one seventh of their waking lives,” said Penny Wilson, chief marketing officer at Hootsuite. “But to capture the attention of customers, brands need to rethink how they engage on social. Businesses must be respectful of their customers’ privacy, while still creating personal 1:1 connections via content that’s important, interesting and timely to the audience while being genuine and authentic to their brands.”

Facebook retained its position as the most popular social media network worldwide. Brands can now reach 2.12 billion people around the world with Facebook ads.

And although growth is slowing, Facebook is still expanding its user base.