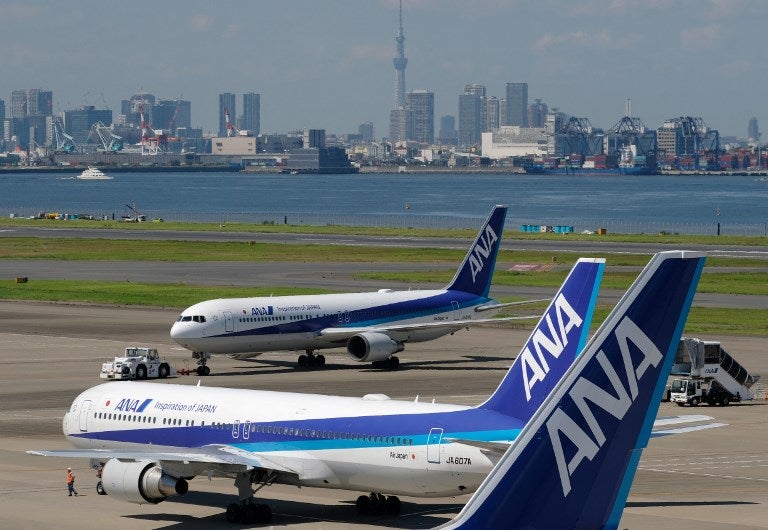 In this file photo taken on July 31, 2018, Boeing passenger planes of All Nippon Airways are seen at Tokyo’s Haneda airport. (Photo by Kazuhiro NOGI / AFP)

In a joint statement on Tuesday, the companies announced that ANA Holdings will take a 9.5 percent stake in PAL Holdings for $95 million. The announcement confirms a report published by the Philippine Daily Inquirer last week.

“We are honored and excited that a premier airline group such as ANA HD has decided to purchase shares in PAL Holdings,” Jaime Bautista, president of PAL Holdings and Philippine Airlines, said in the statement.

“The Philippines and Japan have a long-standing relationship with complementary strengths. This week, in fact, we commemorate the 70th year of Philippine Airlines’ service to Japan, dating back to the launch of our first Manila-Tokyo flight on January 26, 1949,” he added.

“We believe Philippine Airlines is in an excellent operational position to capitalize on both the strong uptick in air traffic growth as well as the vibrant, expanding Philippine economy. We look forward to expanding our business relationship with Philippine Airlines so we can continue to serve our passengers even better,” he added.

The companies noted that ANA Holdings will acquire its shares from Trustmark Holdings Corp.,  owned by the Lucio Tan family and the largest shareholder of PAL Holdings.

“Additionally, the investment by ANA HD heralds the dawn of a new era of growth for PAL, which has embarked on a full-scale expansion program that has seen its fleet and network grow to almost 100 aircraft and 80 destinations in four continents,” PAL said.

Under Bautista, PAL achieved a four star status from the closely-followed Skytrax ratings in 2018. Its next goal is to become a five-star carrier by 2020.

ANA is Japan’s largest airline and a five-star carrier for six consecutive years.

Both companies said completion of the transaction will be done upon certain closing conditions. Shares of PAL Holdings were up 17.74 percent to P15.50 each as of this writing. /je