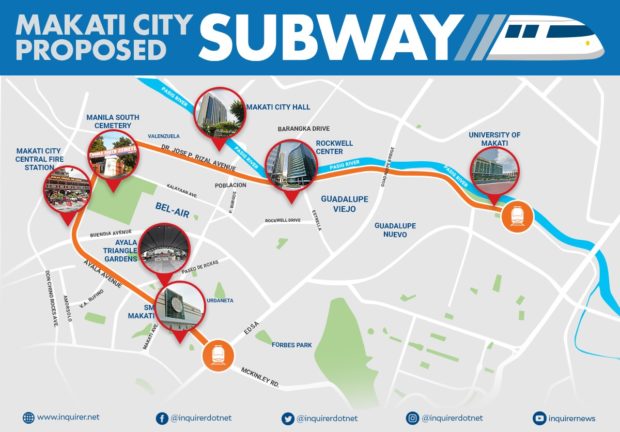 The construction of the $3.7-billion intra-city subway project in Makati City will begin in December 2018. /PHOTO: Courtesy of Ed Lustan

BEIJING — A Shanghai-based investment fund would infuse equity in the subway project of the Makati City government and Philippine Infradev Holdings Inc. — one of several Chinese firms that will help bankroll and build the $3.7-billion mass transit system of the country’s financial capital.

Speaking to reporters over the weekend, MingTu Investment Holdings chair Ni Xiaohong said his firm had recently received the green light from China’s Ministry of Commerce to invest $100 million in the Makati subway project that will break ground this year.

“In China, investing capital abroad is tightly regulated, and we are the first private company that has been given approval to invest in this infrastructure project,” he said through an interpreter. “So we are a pioneer here.”

MingTu Investments had previously help fund the construction of the Jiangyin Yangtze bridge, which, after its completion in 1999, was the fourth longest suspension bridge in the world and the longest in China. It also has equity in Yangzijiang Shipbuilding Co., one of China’s largest shipbuilders.

Philippine Infradev Holdings president and CEO Antonio Tiu told the Inquirer that, all told, the equity participation of Chinese firms in the subway consortium will amount to 35 percent of the joint venture firm, with the balance shared by the Makati City government and Philippine Infradev.

At present, soil testing is already being conducted on the proposed subway route ahead of the project’s actual construction later this year.

The six-month geo-testing involves boring small holes and getting soil and rock samples for analysis from at least 200 points along the proposed subway alignment. The process will last for six months and is part of preliminary works prior to official groundbreaking.

The subway will connect key points in Makati such as the current Central Business District along Ayala Avenue, the Makati City Hall, the Poblacion Heritage Site, the University of Makati, Ospital ng Makati and the other new business districts within the city.

During the construction phase, the project is expected to generate more than 6,000 jobs. /kga