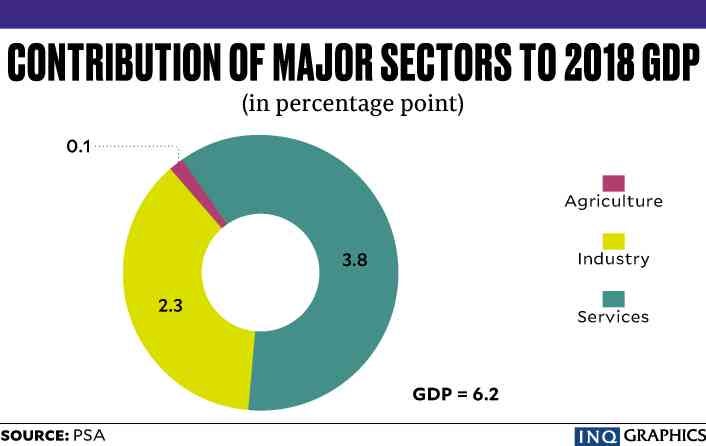 Last year’s GDP growth was the slowest in three years, or since the 6.1 percent posted in 2015.

Headline inflation or the rate of increase in prices of basic commodities hit a 10-year high of 5.2 percent in 2018 due to new or higher excise taxes slapped on consumption, skyrocketing global oil prices, as well as food supply bottlenecks, especially rice.

Had inflation settled within the government’s 2-4 percent target range last year, GDP growth would have reached the lower end of the goal or about 6.5 percent, said Neda Undersecretary Rosemarie G. Edillon.

Pernia blamed the agriculture sector for the slow economic growth as it managed to grow by only 0.8 percent in 2018, slower than the 4 percent in 2017.

He said there was a delay in the DA’s implementation of AO 13, such that the impact on consumer prices was not immediately felt.

Pernia nonetheless said that despite the below-target growth, the economy “remained stable” and had a “steady performance” as it posted the seventh straight year of above 6-percent expansion.

“This is a firm finish that cements the Philippines’ standing as one of the fastest-growing economies in Asia. We are next to India, Vietnam, and China. From the first quarter to the third quarter of 2018, we overtook Indonesia and Thailand regarding economic performance,” Pernia said.

“As we are now in a higher growth trajectory, with our economy growing at an average of 6.5 percent in the first 10 quarters of the administration, we want to focus more on sustaining this momentum,” he added.

Industry expanded by 6.8 percent, also lower than the 7.2 percent in the previous year.

Moving forward, Pernia said the implementation of the “Build, Build, Build” infrastructure program and the focus on improving the performance of services exports would boost economic growth this year.

The government targets a higher 7-8 percent GDP growth for 2019.

Pernia said this year’s growth target was a “serious aspiration, and we are serious on reaching that.”