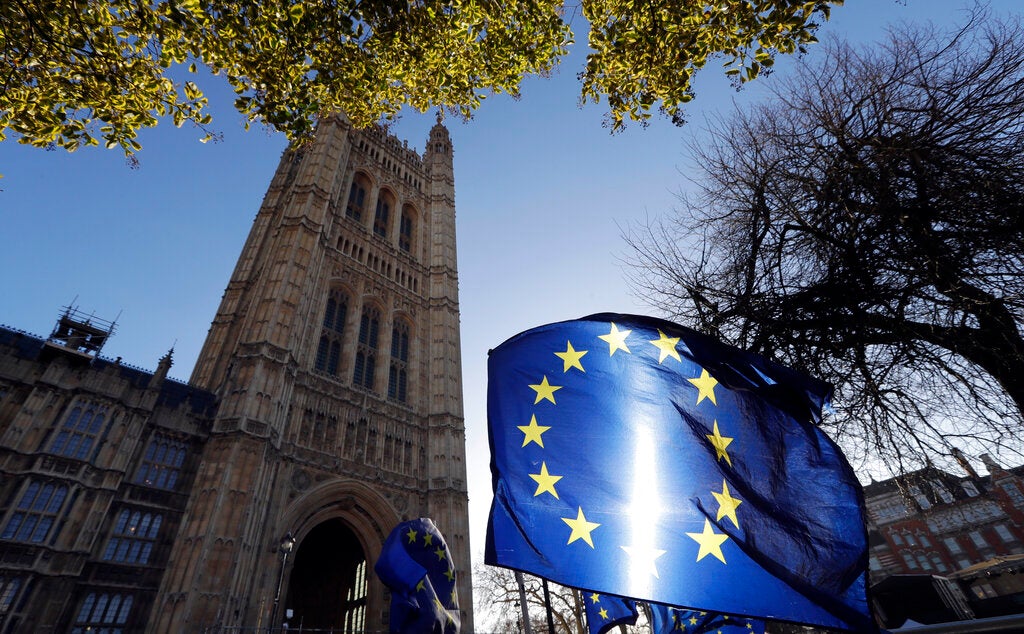 In this January 22, 2019, file photo, the sun shines through European Union flags tied to railings outside parliament in London. (AP Photo/Kirsty Wigglesworth, File)

LONDON — The chief executive of Airbus warned Thursday the aviation giant could move its U.K. operations out of the country if Britain leaves the European Union without a deal on trade relations.

Tom Enders’ sharply worded statement comes as business leaders increasingly express their frustration at the lack of progress in securing a Brexit deal ahead of Britain’s scheduled March 29 exit from the bloc.

U.K. firms are bracing for disruption amid fears that a “no-deal” Brexit will cause economic chaos by eliminating trade agreements and imposing tariffs, customs checks, and other barriers between the U.K. and the EU, its biggest trading partner

“Please don’t listen to the Brexiteers’ madness which asserts that, because we have huge plants here, we will not move and we will always be here,” Enders said. “They are wrong.”

Airbus has more than 14,000 employees in Britain — on top of about 110,000 more working in jobs supported by Airbus programs — as well as some $7.83 billion (6 billion pounds) in annual turnover. But Enders said the country’s aerospace sector now stands at a precipice, with Brexit threatening to destroy a century of development in the world-leading industry.

“Of course, it is not possible to pick up and move our large U.K. factories to other parts of the world immediately,” Enders acknowledged. “However, aerospace is a long-term business and we could be forced to re-direct future investments in the event of a no-deal Brexit. And make no mistake there are plenty of countries out there who would love to build the wings for Airbus aircraft.”

Many large companies in Britain have warned of the dangers of leaving without a deal, fearing the uncertainty and disruption that would bring. The Bank of England has said that in a worst-case scenario, a sudden Brexit with no deal on future relations could trigger a recession, with Britain’s economy shrinking 8 percent within months as unemployment and inflation soar.

Warnings from businesses have grown louder in recent days, but the Airbus comments are notable because of the tone — and the pointed reference about a willingness to pull up stakes and go. Britain’s divided Parliament is set to vote again on Prime Minister Theresa May’s proposal on Tuesday — and on rival plans, including attempts by groups of legislators to delay Britain’s exit and to rule out “no-deal.”

“It is a disgrace that more than two years after the result of the 2016 referendum, businesses are still unable to plan properly for the future,” Enders said. “And we, along with many of our peers, have repeatedly called for clarity. But, we still have no idea what is really going on here.” /kga