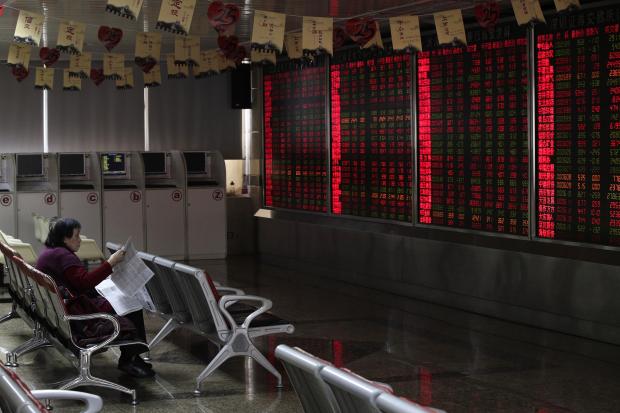 In this Jan. 18, 2019, file photo, a woman reads a newspaper at a brokerage house in Beijing. Shares rose in Shanghai and Hong Kong on Monday, Jan. 21, 2019, as China reported that its growth fell to a three-decade low of 6.6 percent in 2018. The weaker data released Monday raised hopes for additional moves to shore up support for lagging business activity, though benchmarks fell back slightly from stronger gains just after markets opened. (Photo by ANDY WONG / AP)

Shares closed moderately higher in Shanghai, Hong Kong and Shenzhen on Monday as a report of weaker economic growth in 2018 raised hopes for more government stimulus.

The report by the National Statistics Bureau said the world’s second largest economy grew at a 6.6 percent annual pace last year, the slowest since 1990, as slowing demand and a trade war with the U.S. bit dragged on business activity.

Still, officials said there was room for policies to counter the slowdown.

Expectations that the government might step up spending on construction and loosen controls on lending helped push steel mills, property and energy companies higher.

“The details show that the infrastructure investment is shaping up to be the engine for 2019. However, non-infrastructure business activities will be dismal this year. And debt will grow,” Iris Pang of ING Economics said in a commentary.

Much depends on the progress of trade talks with the U.S. If the two sides were to ease tariffs imposed on each other’s exports, less stimulus would be needed, Pang said.

Top trade envoys from both countries are due to meet at the end of January.

The U.S. trade deficit with China grew to a record $323.3 billion in 2018. The two countries have raised taxes on billions of dollars of each other’s goods in the spat over the trade deficit, Beijing’s manufacturing plans, and U.S. complaints that China steals technology from foreign companies. /atm

Read Next
Coffee clash brewing in China: Startup Luckin takes on Starbucks
EDITORS' PICK
PH detects local transmission of Omicron subvariant BA.2.12.1
House energy committee chair Arroyo bats for cheap electricity
Honolulu Café is the cure for your Egg Tarts and Roastings cravings
OVP: Pilot’s claim vs Robredo ‘never happened’, a ‘malicious fabrication’
Luxe property: A way to build, preserve wealth
Petition to reverse Comelec decision on Bongbong Marcos’ DQ case reaches SC
MOST READ
Heart Evangelista gets a ‘no’ from Chiz Escudero after asking, ‘Do I deserve a bag?’
Leni and the future of the Pink Movement
CebuPac places pilot under disciplinary review after ‘baseless’ post vs Robredo
Congress canvassing of votes for president, VP to begin May 24
Don't miss out on the latest news and information.

newsinfo
PH detects local transmission of Omicron subvariant BA.2.12.1
newsinfo
House energy committee chair Arroyo bats for cheap electricity
pop
Honolulu Café is the cure for your Egg Tarts and Roastings cravings
newsinfo
OVP: Pilot’s claim vs Robredo ‘never happened’, a ‘malicious fabrication’
business
Luxe property: A way to build, preserve wealth
newsinfo
Petition to reverse Comelec decision on Bongbong Marcos’ DQ case reaches SC
entertainment
Heart Evangelista gets a ‘no’ from Chiz Escudero after asking, ‘Do I deserve a bag?’
May 17, 2022
opinion
Leni and the future of the Pink Movement
May 17, 2022
newsinfo
CebuPac places pilot under disciplinary review after ‘baseless’ post vs Robredo
May 17, 2022
newsinfo
Congress canvassing of votes for president, VP to begin May 24
May 17, 2022
newsinfo
Man posing as Marcos spox revealed to be an inmate in Bilibid — Guevarra
May 17, 2022
newsinfo
Marcos DQ petitioners told: ‘Learn to respect will of the Filipino people’
May 17, 2022