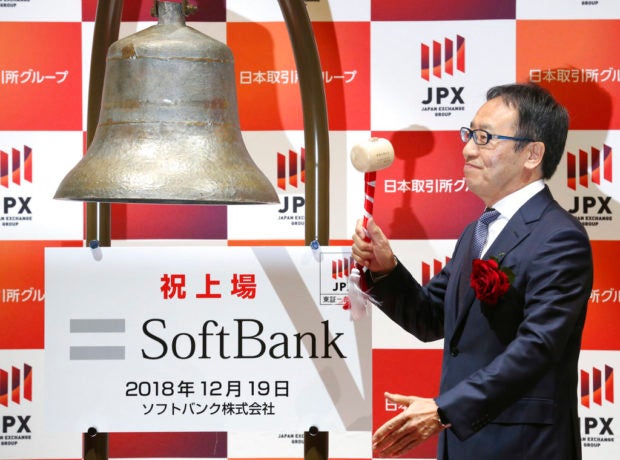 SoftBank Corp.’s CEO Ken Miyauchi rings the bell during a ceremony at the Tokyo Stock Exchange in Tokyo on Dec. 19, 2018. AP

Company president Ken Miyauchi and four other executives each rang a bell with a wooden hammer to celebrate the IPO that seeks to raise more than 2 trillion yen ($18 billion). They didn’t speak at the ceremony but are expected to announce the first-day results at a news conference after the market closes in the afternoon.

The listing came about two weeks after a service outage attributed to a software problem affected a large number of customers in Japan. They were unable to text messages or make payments via mobile phones during the outage, which was resolved after several hours.

SoftBank is listing 1.6 billion shares, or about one third held by its parent company.

The IPO compares with some of the world’s biggest. China’s Alibaba Group raised about $20 billion when it went public in 2014, and Facebook raised $16 billion in 2012.

About half of SoftBank Group’s $100 billion Vision Fund investment money comes from the kingdom. The fund has been investing in solar projects and artificial intelligence.

The parent SoftBank wants to add cash for its investments not linked to Saudi Arabia.

It has invested in a range of companies globally, such as US wireless company Sprint, British IoT company ARM and Chinese e-commerce Alibaba.

SoftBank, which created the Pepper companion robot, was founded in 1986, as a software, broadband and fixed-line telecommunications company. It was the first mobile carrier to offer the Apple iPhone in Japan. /ee